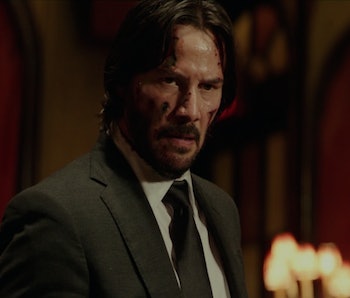 Hollywood craves cinematic universes these days, but when you don’t have comic book source material, it can get tricky to pull off — especially when you’re building backward. In late 2014, John Wick came out of nowhere to thrill fans with an assassin in a vivid underground world of secret black markets, bespoke tailored suits, and a whole lot of brutal fight scenes. Screenwriter Derek Kolstad created the foundations of the John Wick universe in original but didn’t necessarily think he’d ever have to expand on it. But the film was a surprise hit, making $86 million on a tiny budget, so he had to go back to work, writing new adventures for Keanu Reeves’s slick assassin.

While bigger and grittier, John Wick: Chapter 2 isn’t just a lazy rehash of the original. Instead, Chapter 2 goes global and builds out the unique organized crime mythology of the original. Inverse spoke to Kolstad about the difficulties of creating an original cinematic universe, doing his spin on a 1970s thriller, and writing films that make you feel like you’re a 13-year-old kid sneaking into an R-rated movie.

What was your first step in building out the mythology of John Wick for the sequel?

The first John Wick was written on spec. It sold in February and the movie came out in October 2014, which never happens, and we all put our lifeblood and soul into it. So when it did as well as it did and had a groundswell of support, we were surprised it happened so suddenly.

The sequel went through so many versions. The first draft of John Wick 2 dealt with the Irish mob, and then we did the Italian mob, and then the Nigerian mob. We kept talking and developing, but various elements like the Marker stayed the same. It became about rendering the story down to the basics. It needed to be unique but familiar.

The idea was that the action would be bigger but we couldn’t lose the soul we crafted in the first John Wick. We had to retain everything about him worth rooting for.

Did you have an idea about how big the larger John Wick world would be while writing the original?

There are scenes that we took out in the first one and placed in the second one. There are scenes from both that we hope to use in the future. We tried just coming up with unique takes that are genre-heavy but made logical sense within the John Wick world.

One scene that didn’t make it in John Wick 2 that we all loved was, how do these guys transfer funds? There was a jewelry store, and once there you could buy all these Rolexes. In the back of whichever Rolex you bought was an incredibly rare stamp that was worth like a million dollars, and so they transferred their wealth through these weird ways.

How did you approach withholding specific details without just kind of dumping it all out in exposition?

The best tales are the ones that posit a world and encourage others to catch up. It forces the reader or viewer to take things as fact.

We worked on taking all the exposition and dialogue and rendered it down to a look, a smirk, a nod, or an “Uh-huh.” When Aurelio tells the bad guy John Wick’s dog is dead, his response is just, “Oh.” In most scenes, we saw that kind of thing is all you need.

We’re huge fans of thrillers from Alistair MacLean, and we always talked about movies like Three Days of the Condor, Ronin, and The Third Man. In those movies one single line could speak volumes, and we made sure to use that in Chapter 2.

That definitely has to help with writing in action as well.

Since day one we wanted the movie to take place just a couple of weeks after the first one. To us, the best sequels are the ones that just fucking roar right out of the gate.

I grew up loving kung fu movies, then watching the Korean action thrillers of the aughts, and lately the Thai and Filipino actions movies coming out now. The Raid was one of the best moviegoing experiences of my entire life. I remember during that action sequence when the main character is fighting off guys in a hallway and he does a reverse guillotine kill on a broken door, I leaned forward in my seat and was looking around like a 13-year-old who snuck into an R-rated movie. I couldn’t believe it. And I look over and there’s a guy at the end of my aisle thinking the exact same thing. Like, “Did you see that!?”

The amount of work Keanu went through to be able to do this stuff was unreal. These aren’t stunts. It’s Keanu getting his ass handed to him, and him handing it back. We didn’t want to copy, and we didn’t want to emulate. We wanted these John Wick movies to be true homages to the stuff we love, but also shift things up a notch.