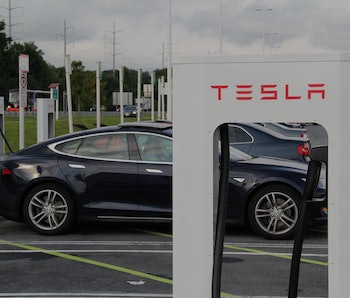 Tesla wants to make sure that drivers of its all-electric cars don’t pull up to one of its branded charging stations to find out there are no empty pumps.

The automaker’s widespread network of chargers — Tesla calls them “Superchargers” — is ideal for beating range anxiety, or the fear your car might run out of battery.

Half an hour charging at a 120-kilowatt supercharger provides 170 extra miles of range, compared to 11 miles from an 11-kilowatt home charger. But if you’re planning a trip around the supercharger network, it’s hard to guarantee the spots aren’t occupied when you get there.

Worry no more. On Thursday, Tesla upgraded the software powering the 17-inch touchscreens found in Model S and Model X vehicles. The supercharger map now displays how many stalls each location has, alongside how many of those stalls are in use.

It’s a benefit unparalleled in the electric vehicle industry. Tesla claims it’s the only manufacturer capable of charging vehicles at 120 kilowatts. With the reduced charging times, the company recommends pulling up to a supercharger, grabbing some food and using the smartphone app to keep an eye on your car’s charging status. Charging time is measured in minutes rather than hours. The supercharger network reaches far across the globe, with 795 stations hosting a total 5,085 charging points.

Unfortunately, what used to be a completely free service now comes at a price. Tesla introduced a supercharger pricing scheme last month to recover the costs of building and maintaining the network. Owners receive 400 kilowatt-hours free each year, which covers around 1,000 miles. After that, it’s dependent on the region: in California, for example, it’ll cost you $0.20 per kilowatt-hour. San Francisco to Los Angeles, a nearly 400-mile journey, will cost around $15.

It’s a shame it’s no longer free, but at least when the Model 3 brings Tesla to a mass market audience, new owners will have the ability to try out their new purchase with a bundle of free credit.