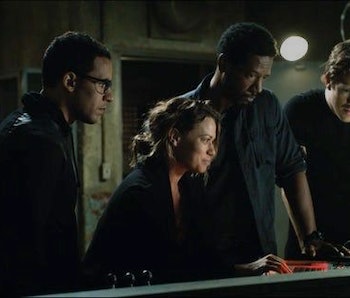 The alien invasion drama Colony raised more questions than it answered on Thursday’s new episode, which must have been very frustrating for the Resistance when it seemed like they’d finally made some progress disrupting an alien communication link. After a risky operation, Broussard and his insurgent comrades were still left in the dark when it came to spying on the aliens — literally.

In the Season 1 finale, “Gateway,” the Resistance accidentally killed its first alien and managed to swipe a piece of alien technology to boot. In “Company Man,” we finally learn what it can do.

By luring an alien drone into an alleyway, Broussard uses the extraterrestrial tech to put the small surveillance robot to sleep. Before it can wake up again and tear them to pieces, a quick-thinking Morgan attaches a camera under its hood. The Resistance squad scatters, the drone flies away, and they suddenly have eyes in the sky for the first time.

This moment of triumph for Broussard (who is finally getting a little face time this season) is a bit of a letdown. When they observe the bugged drone flying into the colony bloc wall, it’s pitch black, save for the streaks of thousands of other drones emitting a piercing sound. If the resistance can figure out what the audio signal actually is, then they can hack into whatever method the aliens use to communicate. But that little bit of information is all we get — and the Resistance — get. It’s too bad that as one question gets an answer, a more boring question takes its place.

Bowman’s plot, meanwhile, doesn’t advance much either. He’s decided to go back to work again after saving Charlie and learning that the CTA bugged his house. Bowman and Burke butt heads, and it seems like the CTA is up to something more than just rooting out and destroying the terrorism that threatens the security of our Los Angeles bloc.”

However, the pair’s private tête–à–tête gets disrupted when a bomb from radical Resistance faction, the Red Hand, rips through the police lobby. It’s the perfect excuse for Bowman to slink away and scope out the surveillance room. It’s there he realizes just how much the CTA is spying on his family.

The episode boiled down to Bowman and Broussard dealing with uncovering new mysteries that they can’t solve just yet and trying to come to terms with the unsatisfying new status quo. This isn’t the most illuminating theme to explore in the middle of a show’s sophomore season, but hopefully all the waiting around will yield some action.

“We play our roles,” Bowman tells Katie while on a stroll away from CTA surveillance. “Me the good soldier, you the good citizen.” That’s great for now, but they need to start not playing their roles for Colony to remain engaging.