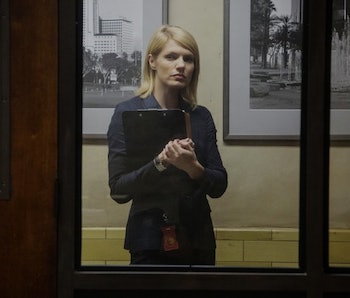 Anyone still waiting for answers to the many questions leftover from last week’s Colony episode about the Bowman family’s reunion with their missing son, Charlie, will have to wait a little bit longer. Thursday’s episode of Colony framed the Bowman homecoming around the tragic end of beleaguered Homeland Security collaborator Jennifer McMahon.

After the new Proxy forced her to give up her source in the resistance, with Katie willing to give herself up at the end of the last episode, Jennifer stayed resilient against the ubiquitous surveillance methods of the Colony Transitional Authority to prove she isn’t much of a collaborator at all. An internal affairs officer, Burke, is sent in to make sure her allegiance is up to par after she plays coy about giving up the source. “I’m going to dig, and if I find something, you’re going to the Factory,” he says, threatening her.

She stays worried, but she’s too focused on peeking in on the fallout from Bowman’s jaunt into the Santa Monica bloc to get Charlie. After being spared by an alien drone for some reason (RIP Devon), Bowman has to reckon with the fact that he’s delivered one son home but lost another: Bram was sent to a labor camp after getting caught going under the wall.

He also has to reckon with the fact that Katie was a full fledged resistance member against him, but she’s keen on letting him know she’s out for good. But giving up the cause also meant possibly giving up her family. Because she wouldn’t give key resistance operative Broussard, she left it up to Jennifer to bring her in to be sent straight to the Factory.

Jennifer could just as easily give Katie up to the new Proxy and be done with it. But that loyalty might be for naught. “Jennifer’s got a good heart, but she’s weak,” she hears Will say over the surveillance channel. “It won’t take much to break her.” This betrayal causes her to go straight to the new Proxy, but she can’t give them up. The only thing she can muster is that “He’ll be a big asset to the office,” which promptly gets her demoted, effective immediately.

But such a demotion means more that just a pay-cut. It’ll probably mean she’s done for, so she takes the first steps in peeling back the CTA’s data processing techniques by deleting all the key files related to the Bowmans. She’s kind of like a reverse-Edward Snowden. She knows with this newfound opportunity, Will and Katie will only fight even harder against the resistance.

Then, Jennifer heads back home, pulls out some restricted wine and a seriously restricted cell phone, and sits at the dinner table, watching a video of her dog and husband before the Arrival. Fighting back tears, she slowly eats pill after pill. Her familial sacrifice will help ensure her life under the occupation wasn’t in vain.