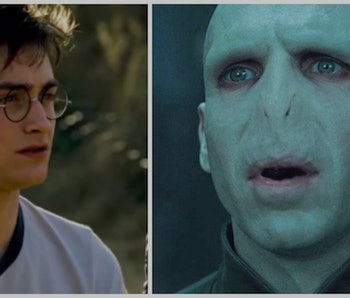 “Harry Potter and Voldemort — in love all along?” sounds like the kind of sensational alternative facts headline that Rita Skeeter would write. But a new fan video poses that question to a surprisingly convincing result.

In the video’s edited version of the Potter story, as Voldemort says, “Before the night is out, he will come to me!” and creepily whispers, “join me in the Forbidden Forest,” Harry is shown staring longingly in various settings. It plays off the style of the 50 Shades of Grey trailers, in which a young ingenue falls for a dangerous man, and the pick-up line possibilities inherent in many Potter terms. That’s not even mentioning the sheer fact that Harry and Voldemort do share a strong connection and a soul. The fan fiction practically writes itself.

Although slash fiction is wildly popular in the Harry Potter fandom, Harry and Voldemort aren’t exactly the most common pairing (that would be Harry and Draco Malfoy and Remus Lupin and Sirius Black). But perhaps that will change.

Another recent fan video pits Voldemort as the Beast to Emma Watson’s Beauty. Thanks to the revelation in Harry Potter and the Cursed Child that Voldemort has a secret kid (yes, really), maybe it shouldn’t be so surprising he’s seeing so much action of late. Watch the video below.

More like this
Gaming
6.28.2022 3:00 PM
How Ace Attorney spawned one of the most enduring character ships ever
By Hayes Madsen
Entertainment
6.23.2022 4:42 PM
Obi-Wan Kenobi Easter egg gives the show’s best scene a deeper meaning
By Dais Johnston
Entertainment
6.25.2022 12:30 PM
'Rings of Power' video sets up the return of Tolkien's most underrated creatures
By Alex Welch
Share: