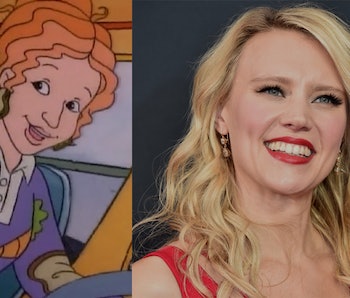 Kids who grew up in the ‘90s probably wished that they had a teacher at their school as cool as The Magic School Bus’s Ms. Frizzle, who would go on educational field trips by shrinking her students to explore another child’s bowels or transforming them all into reptiles. Now, an entire new generation of youths will wish they had class with Ms. Frizzle, because Netflix announced that it cast Saturday Night Live’s Kate McKinnon to voice the whacky teacher in their upcoming reboot, Magic School Bus Rides Again.

The revival, which was announced way back in 2014 but finally seems to be making some progress, will make full use of the McKinnon’s talents. She only has a handful of voice acting roles to her name, having appeared in The Angry Birds Movie, Finding Dory, and a handful of animated TV shows, but based on her eccentric performances on SNL and in 2016’s Ghostbusters, she’ll do just fine.

McKinnon is inheriting the role from Lily Tomlin, who brought Ms. Frizzle to life back in the original run of the show.

Stu Stone, a producer on the reboot (and the voice of Ralphie on the original series) told TMZ that Rides Again will boast “a big budget, celebrity cameos, and a ton of surprises.”

Sounds great, and McKinnon sounds like a natural fit for the role of Ms. Frizzle, but how will her iteration of the classic character react when one of her students takes off his helmet on Pluto and straight-up dies!?

Magic School Bus Rides Again does not have a premiere date yet.