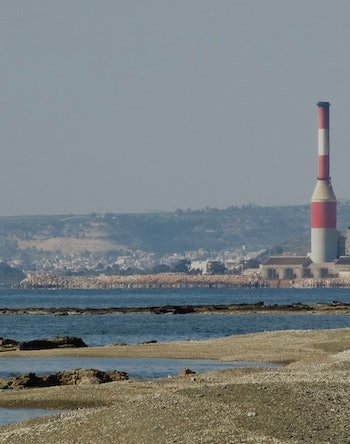 To geochemist Greg Rau, the future looks like a seaside power plant. More specifically, it looks like a biomass combustion plant that’s actually carbon-negative because the CO2 emissions are dissolved and captured in a mix of seawater and alkaline minerals through a process called chemical weathering. Why does Rau want to see that plant erected, perhaps along the coast near UC Santa Cruz, where he works? Because he believes that energy generation can solve the problems created by energy generation. He believes that this is how you begin to turn back 150 years of carbon dioxide emissions before sea level rise engulfs the landscape and would-be power plant operators have to look for new real estate.

That chemical weathering process results in an alkaline solution. When it’s pumped back to the ocean, it makes the local seawater less acidic, ameliorating some of the effects of ocean acidification driven by rising atmospheric CO2 levels. That would be good news for the neighbors. Shell-building organisms live increasingly in structurally unsound homes because of acid’s effect on calcium carbonate. Coral growth slows. Fish that live on reefs suffer. Ecosystems collapse.

But not near the outflow pipes of Rau’s power plant, where the water’s pH is close to what it was before the industrial revolution, making it rich and even valuable. A 2016 study found that adding alkalinity to seawater on a small atoll on the Great Barrier Reef increased coral growth rates by seven percent. Commercially important shellfish like clams, mussels, and oysters might see similar gains.

“You might envision shellfish farms clustering around power plants because this alkalinity can be cheaply generated, and it could be very beneficial to their operation,” Rau tells Inverse.

This vision of a thriving coastal ecosystem buoyed by energy generation industries is particularly potent at a moment when carbon capture and storage technologies are getting an increasing amount of attention from environmental and government groups. Direct management of carbon dioxide levels is, generally speaking, a complicated business. Liming the sea is, well, doable.

To prove that point, Rau built a lab-scale simulation of his power plant idea. It’s a closed system, but his results warrant a double take. The seawater-mineral solution successfully scrubbed 97 percent of the carbon dioxide from a simulated flue gas stream. Is that proof positive that environmental effects would all be positive? Not exactly. But it shows the tremendous potential of a new type of system that is, in many ways, just an elaboration on natural processes.

Just like this planet has a water cycle that keeps lakes and rivers fed, it also has a carbon cycle that balances levels of CO2 in the atmosphere. If, say, a very big volcanic eruption launches a large amount of carbon dioxide into the atmosphere, the system will over time rebalance itself. As carbonic acids make their way through the water cycle, they make contact with the alkaline minerals, like limestone, that make up about 90 percent of Earth’s crust. The acids dissolve the minerals, and this solution makes its way to the oceans, where the carbon is taken up by corals and shellfish. The carbon that started in the air ultimately settles to the bottom of the ocean in the form of carbonate minerals that gradually settle into new limestone.

The reason this natural carbon cycle isn’t saving us from climate change is because it is too slow to keep up with the current rate of human carbon dioxide emissions. The chemical weathering of rocks takes about a billion tons of carbon dioxide out of the air each year, but human activities are collectively causing about 34 billion tons to enter the atmosphere every year.

“This whole idea of adding alkalinity to the ocean is really mimicking what nature naturally does — we’re just trying to figure out ways of speeding it up to not only mitigate CO2 but also ocean acidification,” says Rau.

This accelerated chemical weathering is part of a suite of technologies that fall under the umbrella of carbon dioxide removal — pulling carbon out of the atmosphere and sequestering it permanently. In the long run, stabilizing the climate will almost certainly require large-scale carbon removal, and last month the U.S. government opened the door to the possibility that federal money could go towards research into these sorts of technologies.

There are lots of ideas out there for how this might be done, but none of them is a silver bullet. They cost money, and present enormous logistical challenges when you start to think about scaling up to a level that would undo fossil fuel emissions. Ultimately, it’s almost always easier to avoid putting emissions into the air in the first place than the call them back.

The same goes for Rau’s chemical-driven tech. What it represents is the opportunity to address a key issue without a significant drawback to energy consumers or the local environment. Alkaline minerals are abundant and cheap. The area around the power plant could be prosperous. There wouldn’t be much smoke. The NIMBY problems are manageable. But a few carbon-negative power plants won’t solve climate change. You’d have to chemically weather 100 billion tons of rock every year just to offset the world’s current level of new emissions, a report of the National Academy of Sciences estimates. For comparison, global coal production is about eight billion tons per year.

“As we put off doing the obvious and easy thing to do — reduce our emissions — these other methods of carbon management and climate management are ultimately going to come to the fore, because there are no other alternatives,” says Rau. “Now is the time to figure out what our options might be in the likely event that now we’re going to be faced with that situation.”