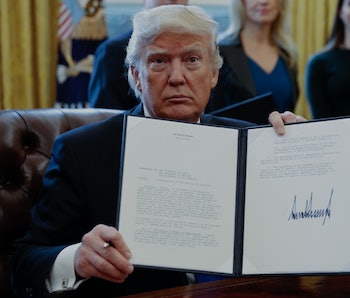 Despite months of protests and a brief bit of hope, it looks like the Dakota Access Pipeline is going to be completed after all — and soon. The sudden reversal is the work of, you guessed it, President Donald Trump. Just fifteen days ago, he issued a memorandum asking the U.S. Army Corps of Engineers to rush through a lengthy environmental review process, and on Tuesday, the Army officially agreed.

So, how did we get here? How did the status of the now-infamous pipeline, which will pass through and possibly damage sacred Native American lands and communities, change so completely in just over two months?

In early December, the Army said it would not approve an easement that would allow the pipeline to pass underneath North Dakota’s Lake Oahe just a half-mile away from the Standing Rock Sioux Tribe’s reservation. “It’s clear that there’s more work to do,” United States Assistant Secretary of the Army Jo-Ellen Darcy said at the time. “The best way to complete that work responsibly and expeditiously is to explore alternate routes for the pipeline crossing.”

This seemed like a hard-fought victory for protestors, and the Army said it was working on an environmental impact statement (EIS) that would assess if there were other routes the pipeline could take. However, on January 24, President Trump signed an executive order asking the Army to expedite the process — essentially, to just get on with the dang thing. It was only two pages but set in motion the pipeline’s return:

That takes us to six days later, when Acting Secretary of the Army Robert Speer directed the Army to proceed with construction of the crucial embankment.

The Army Corps of Engineers told a federal court Tuesday that it was cutting short the environmental impact assessment and public comment period it had pledged to do earlier, and would imminently begin construction.

The Army is waiving the usual 14-day waiting period it usually adheres to after notifying Congress, and plans on issuing the easement to Energy Transfer Partners, the company behind the pipeline, within 24 hours.

According to BuzzFeed reporter Zoe Tillman, a Department of Justice lawyer says the Army could finish Trump’s expedited review as early as Friday. After that, we can expect a finished pipeline in about 60 days time. Oil should flow through in around 83 days.

“Americans have come together in support of the Tribe asking for a fair, balanced and lawful pipeline process,” Dave Archambault II, the chairman of the Standing Rock Sioux Tribe, said in a statement after the Army announcement on Tuesday. “The environmental impact statement was wrongfully terminated. This pipeline was unfairly rerouted across our treaty lands. The Trump administration – yet again – is poised to set a precedent that defies the law and the will of Americans and our allies around the world.”

The Tribe says it will challenge any easement decision, but things look pretty grim.