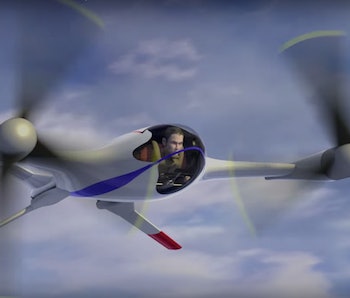 It sounds a little crazy, but a shakeup involving NASA and Uber might mean that flying cars will land in your city sooner than you think, because Uber just poached the Thomas Edison of personal aviation from NASA — and we have Donald Trump to thank.

The election of Trump will most certainly continue the trend of government agencies like NASA doing work that is already done in the private sector (the fights are already happening). That means any NASA employees working on those projects might be eyeballing a run for the exits.

Meanwhile, ride-sharing giant Uber’s idea for VTOL (vertical take-off and landing) vehicles has gained traction in the last few years, culminating in the release of a fascinating white paper on the subject in October. One Uber official even suggests we could have flying cars in the next decade. And so the scoop from Bloomberg on Monday should come as no surprise: Uber has managed to lure away Mark Moore, a 30-year employee of NASA and its resident flying car expert.

Moore’s making the leap to the private sector to help CEO Travis Kalanick develop Uber Elevate — the name of the project — and show it’s more than just a white paper or marketing gimmick.

Down in paragraph eight of the Bloomberg report, we learn that “Moore seems to be disillusioned with NASA.”

Mike Finneran, the news chief at NASA Langley, tells Inverse that Moore will be on the job for the rest of the week, but is directing all of his media inquiries through Uber.

Nikhil Goel, Uber’s Head of Product Management and lead on Uber Elevate, tells Inverse that “Uber continues to see its role as a catalyst to the growing developing VTOL ecosystem. We’re excited to have Mark join us to work with companies and stakeholders as we continue to explore the use case described in our white paper.”

Moore had been working on flying car technology at NASA for years, but funding for the projects was regularly redirected away from personalized electronic vehicles toward other projects, like low-carbon aircraft. With NASA’s immediate future involving more partnerships with private companies, instead of government-funded projects, it’s reasonable to understand why Moore moved to Uber.

In his move to Uber, NASA seems to have lost one of its biggest proponents of this technology. Even without funding to build one of his designs, Moore became synonymous with flying car technology, so much so that he consulted Uber on its research that ended up in its VTOL white paper, Bloomberg reported. His Puffin (seen below) is a little different than the current designs for Uber Elevate, but the general concept is the same.

Moore’s research on the cost of VTOL systems supports the financial claims that air-taxis could be as cheap, or cheaper than regular taxis.

There are a number of things that still need to happen for flying cars to become a reality: Batteries need to last longer, air travel regulations need refinement, autonomous flight need to be developed, and noise pollution needs to be reined in. But, now that Uber’s hired Moore, they’re certainly closer than they would be without him.

And who knows, with Trump pushing NASA to work more with the private sector, Moore — in his new role at Uber — might be partnering with his NASA colleagues again, anyway.

More like this
Science
6.24.2022 4:30 PM
NASA’s Artemis 1 mission is now taking the final steps toward its historic Moonshot
By Doris Elín Urrutia
Science
6.22.2022 10:45 AM
NASA hints its Artemis Moon rocket may not need a fifth dress rehearsal
By Doris Elín Urrutia
Innovation
6.27.2022 8:00 PM
Artificial photosynthesis can grow plants without light — and may solve a planetary dilemma
By Steph Lee
Related Tags
Share: