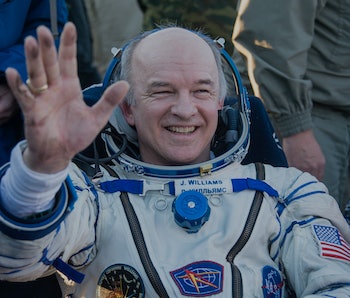 We take gravity for granted in a lot of situations — eating, walking, lying down to sleep — and yeah, taking a crap. Shitting in space is just one of the many conundrums that highly-educated government scientists spend days, or even months thinking about, but for the future manned Orion missions in the 2020s, NASA decided to crowdsource a solution.

Late last year, NASA announced the Space Poop Competition, an open contest to create a new waste-management system for the “escape suits” astronauts might have to wear for long periods of time in emergency situations. Today, the agency told Space.com that the new poop-chute might fly for the first time on the upcoming Orion missions in 2021 and 2023.

Poop challenge participants were tasked with designing a new system that would filter off urine, fecal matter, and menstrual fluid for up to six days — the winning team gets $30,000, which is a lot of money for cleaning up crap. In the past, astronauts have just used adult diapers when blasting off of Earth, and the special suit used for spacewalks has one built in. But both of those solutions assume that the astronaut will be able to change and clean up after a few hours, which may not be the case in certain emergency situations in long-distance spaceflight.

“In the event of cabin depressurization or other contingency, crew members may need to take refuge in their launch and entry suits for a long-duration: 144 hours,” NASA wrote in a statement. “The crew member will have less than 60 minutes to get into and seal their spacesuit. To ensure the crew member’s safety, the solution [poop system] needs to take no more than five minutes [to get on inside the spacesuit].”

The system has to work for both genders, of course, and hopefully won’t actually be used. For normal bowel movements, astronauts have suction toilets that help make sure all their crap doesn’t fly around the ship in zero gravity.

The winners of the Space Poop Challenge will be announced on February 16. There’s no word on how the poop system works in Boeing’s fancy new spacesuit for the Starliner craft, unfortunately.

More like this
Science
8.12.2022 10:00 AM
45 years ago, the first Space Shuttle made history without going to space
By Allie Hutchison
Science
8.3.2022 8:56 PM
NASA confirms Artemis I launch date and previews upcoming milestones
By Kiona Smith
Science
8.14.2022 7:00 PM
Do aliens exist? Jupiter’s moon Europa could hold the answer
By LAURENCE TOGNETTI and Universe Today
Related Tags
Share: