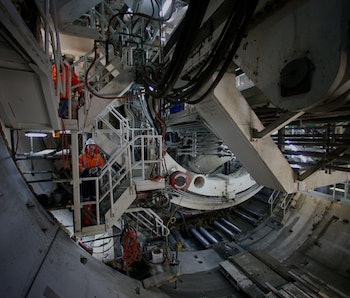 Elon Musk’s latest passion project is figuring out a way to dig gigantic tunnels under the city of Los Angeles so he can escape the catastrophic LA traffic. For the most part, Musk’s plan has sounded like, well, reinventing the subway, but pop in the Hyperloop and his Boring Company starts to make a little more sense.

Musk has been talking about the tunnels for a while now, often in connection to events or news about the Hyperloop. He even said he got the idea for Hyperloop while getting stuck in traffic in LA in the Hyperloop pod design contest last year. The search for quicker, cheaper, and more efficient methods of tunneling will make big waves in a lot of city planning — moving traffic off the surface has been a solution to city congestion for a long time, but it’s very, very expensive (the latest expansion to New York City’s subway cost $4.5 billion). Still, if Musk figures out a way to tunnel in an economically efficient way, getting the Hyperloop off the surface and into the ground could be good for future-transportation in the long run.

There are some serious hurdles to be met by the “Boring Company.” First off is the cost. The most recent major tunnel system to be built in a city is Boston’s “Big Dig.” The three and a half mile long tunnel system goes through the heart of Boston took 16 years and cost $24.3 billion to complete once the interest is factored in. It also seems to have succeeded in reducing congestion and serves as a proof of concept for Musk – he just has to figure out how to actually make the tunneling worth it.

The trick might be factoring in Hyperloop. As Popular Science pointed out, there is research showing that adding more roads can actually increase traffic, because having greater ability to drive makes people more willing to drive instead of taking public transportation. Elon Musk had a facetious tweet in response, but he doesnt really respond to the research that suggest that yes, under the right conditions removing lanes can actually improve traffic.

And Elon has given some suggestion that his 30-layer tunnel dream might be for Hyperloop. On January 27, the night before the Hyperloop pod contest, Musk retweeted a promotional update from the Hyperloop team, and added “and we start digging the tunnel tonight.”

In a statement after the contest on Monday, he said that he started digging at SpaceX, to test his theory that his boring techniques can increase the speed you can dig giant holes by 500 to 1,000 percent. If workers could do it that much faster, the cost of digging the tunnels would significantly decrease.

And although Hyperloop is typically imagined as being above ground, putting the vacuum tubes in the ground might make them safer – which Musk kind of hints at in a tweet about safety of his LA tunnels during earthquakes.

The Hyperloop is primarily a long-term transportation solution, but it’s going to have to get into major cities somehow. If the Boring Company can actually achieve the kind of efficiency and speed of boring that Musk is talking about, its first commission might be building the Hyperloop’s first destination center underneath LA. And with Musk’s current tunnel obsession, it looks like we’re certainly going down the fast lane.

More like this
Innovation
8.8.2022 10:00 AM
A wild new plane-train hybrid could whoosh you to your destination — if it can get off the ground
By Molly Glick
Entertainment
8.5.2022 12:30 PM
For All Mankind Season 3’s space mogul is better than Elon Musk — here's why
By Ryan Britt
Innovation
8.5.2022 6:30 PM
This breakthrough stem-cell therapy could reverse genetic blindness
By Charles Q. Choi
Related Tags
Share: