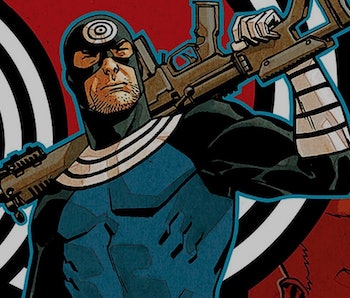 Casual Marvel fans may remember Bullseye as the goofy villain from the 2003 film Daredevil, played by Colin Farrell to hammy heights. This week, Bullseye appears in his own solo comic, and it’s considerably less laughable than his last appearance. In fact, it’s downright brutal.

Ed Brisson begins work another new solo series dedicated to a Marvel villain (Kingpin being another recent addition). Brisson brings the same kind of violent energy that he has previously on crime stories like The Violent.

In a cheeky turn of events, Brisson starts his work on Bullseye by deliberately calling out some scenes from the Ben Affleck Daredevil film, namely Bullseye’s introduction where he murders a couple bar patrons using a straightened paper clip. The scene was funny and meant to demonstrate Bullseye’s skills at murder using everyday objects, though Colin Ferrel’s crazy eyes certainly didn’t help audiences take the villain seriously as a villain.

While it would be a shame to spoil everything in the fantastic Bullseye series debut, it’s safe to say that the comic book version upped the ante on Bullseye’s ability to murder using everyday objects. There’s even a scene later in the book where the body count from death by paperclips is substantially higher than in the film.

Marvel’s Bullseye #1 is off to a rollicking start, with the criminal more unhinged than ever, but with a sense of purpose that immediately differentiates him from Ferrel’s wild-eyed maniac. Bullseye is crazy for sure, but in the book, he’s at least a professional.

Bullseye’s most interesting plot, however, is how it follows the recently resurrected Bullseye try and get back into the hitman game. It’s kind of like John Wick actually if John Wick was a hellbent psychopath instead of someone who just really loved his wife and dog.

Bullseye #1 is out now in comic book stores and digital retailers.