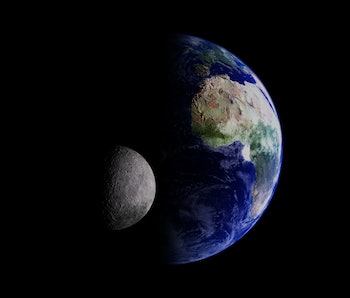 The Japanese spacecraft SELENE, perhaps better known by its nickname Kaguya, was launched in 2007 with the aim to study the moon’s surprisingly vibrant particulate matter from lunar orbit.

That work has now culminated in new findings published in Nature Astronomy Monday, which show that solar winds carry high-energy terrestrial ions from Earth to the moon. In other words, the Earth’s atmosphere from billions of years ago may just be lying on the surface of the moon.

For five days each month, the Earth shields the moon from high-energy solar winds. But in exchange for giving protection, it bombards the moon with terrestrial ions. During the lunar orbit, the moon hides in the shadow of the Earth���s magnetic field, but during this time, oxygen from the Earth flurries to the moon through a funnel of electrically-charged particles created by the magnetic field. Inside, there’s a thinner funnel called the plasma sheet.

When Kaguya passed through the plasma sheet, it found high-energy oxygen ions. Scientists found that these ions came from Earth’s atmosphere, not solar winds, and they were most likely produced by plants. But when the moon was outside the Earth’s magnetic field, Kaguya did not detect these ions.

The MAVEN spacecraft also recently observed that Mars has a plasma sheet mostly made of oxygen, although it has a weak magnetosphere. This might mean that when Earth had a weaker magnetic field, the Earth might still have had plasma sheets that funneled Earth’s oxygen ions to the moon.

More like this
Science
10 hours ago
What Mysteries is the Universe Hiding from Us? A Cosmologist Weighs In
By M. Mitchell Waldrop and Knowable Magazine
Science
Feb. 4, 2023
Astronomers May Be on the Cusp of a “Potentially Revolutionary” Cosmological Breakthrough
By Universe Today and Matt Williams
Science
Feb. 4, 2023
The Milky Way Galaxy May Be a Unique Heavyweight in One Weird Way
By Evan Gough and Universe Today
LEARN SOMETHING NEW EVERY DAY.
Related Tags
Share: