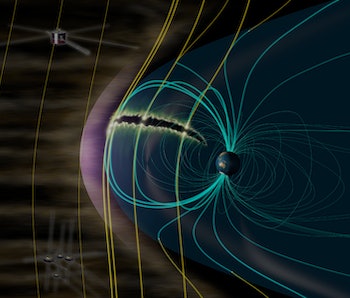 When Earth’s magnetic fields are disturbed by solar winds ejected by the sun 93 million miles away, the particles in the magnetosphere become so charged by the ionization process that they produce a specularly colorful light show — an experience people dream about.

And when two auroras crash into one another, a literal explosion occurs. How exactly auroral explosions happen, however, are still something of a mystery. In a study released Friday, an international team of scientists using data from the U.S. - Japan GEOTAIL mission, and NASA’s Magnetospheric Multiscale (MMS) satellites, the role of solar winds on auroral explosions is now better understood. The key, it turns out, is something called magnetic reconnection.

The interface of Earth and outer space is called geospace, and it’s the opposite of cool, calm, and collected. Solar winds make this section of Earth’s orbit a violent place. The only thing protecting us feeble lifeforms from this celestial aggression is our planet’s magnetosphere. Auroras are a wonderful side-effect to this process.

But why do auroras crash into one another? How do these super-lit phenomena manage to move around into another and cause explosions?

Sometimes, that solar wind is strong enough to facilitate magnetic reconnection — which is essentially when the magnetic energy of the magnetosphere is converted into kinetic energy, thermal energy, and particle acceleration.

The team of researchers used GEOTAIL and MMS data (both of which are deigned to study Earth’s magnetosphere) to detect plasma jets produced by magnetic reconnection stretching out to over five hours.

The new findings, published in Geophysical Research Letters, essentially confirm that magnetic reconnection is a sufficient mechanism for pulling out enough energy from solar winds to create auroral explosions. The data also illustrates that magnetic reconnection can stretch over a distance of 70,000 kilometers, facilitating auroral explosion over an incredible distance.

Japan’s space agency, JAXA, plans to launch a new spacecraft called the ERG Satellite that will observe the inner region of the magnetosphere. Combined with GEOTAIL’s mission, this data will help paint a more comprehensive picture for explaining auroral explosions.

More like this
Science
8.1.2022 3:00 PM
After stellar ancestors exploded as supernovae, their stardust formed our Solar System
By Doris Elín Urrutia
Science
7.26.2022 11:30 AM
Astronomers plan to track more potential “planet killer” asteroids near Earth
By Doris Elín Urrutia
Science
8.7.2022 9:00 PM
Scientists now know how likely you are to be killed by space junk
By Monica Grady and The Conversation
Related Tags
Share: