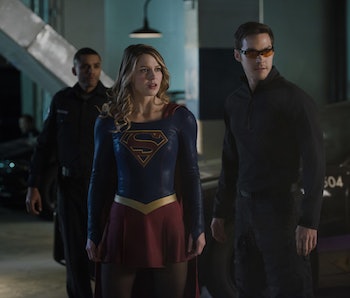 On the second episode of part two of Supergirl’s sophomore season, “We Can Be Heroes,” it seemed at first that Kara’s big struggle was going to be a duel with her nemesis, Livewire. However, that wasn’t the most shocking event of the hour, because Kara finally learned that two of the most important men in her life were lying to her, and it doesn’t seem like the conflict has been resolved.

The biggest plot point — well, aside from M’gann’s warning that White Martians are going to invade next week — was Kara’s long-overdue discovery that Jimmy Olsen was moonlighting as the superhero Guardian. She really was the last person to know, as all of her friends almost comically point out, but Kara is pissed. She’s annoyed that she was deceived, and she’s worried that Jimmy, who does not have superpowers, is going to get hurt. Jimmy, meanwhile, is hurt that Kara doesn’t believe in him, and he rejects her order to stop all this vigilantism. Kara and Jimmy’s friendship has been a major part of the show, and now the pair are practically enemies, which isn’t great for either of them.

It’s especially not great because Kara’s other big ally, Mon-El, went and made things weird. Mon-El’s superhero training was going pretty well, although it’s clear he still needs work since he recklessly jumps in to defend Kara, even when there’s more important work to be done or civilians to defend. When Kara confronts him about this, Mon-El comes clean. No, not about being a prince, but about being in love with her.

Kara is nice, or at least as nice as you can be in this situation, but she doesn’t reciprocate. Although the two say they’re going to continue being partners and just treat the confession as water under the bridge, Kara’s face at the close of the episode shows that things aren’t back to normal. Now, in addition to an impending alien invasion, Kara need to grapple with two close relationships which have both changed, drastically and suddenly.

Who would have thought that the encounter with Livewire would actually end up being one of the more positive things to happen to Kara all episode?