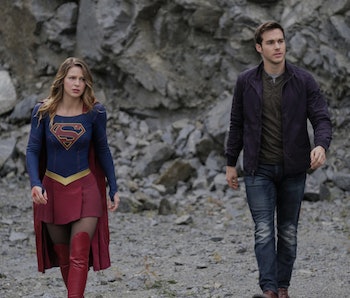 Supergirl is back on TV and back in her own universe after last year’s big Arrowverse crossover, “Heroes vs. Aliens.” But, it turns out that the Dominators — the evil invading alien species from the crossover — are pulling off nefarious deeds in the Supergirl universe too. We thought that they were the badest aliens out there, but it turns out there’s someone that even they bow to: Mon-El.

Kara and Mon-El, her budding Daxamite friend, ended up on “Slavers Moon,” a nasty extraterrestrial world that’s exactly what the name suggests, while Kara is hunting down a missing girl as part of her job as a journalist. Once they pass through a transporter and wind up on the moon, they quickly realize two things: they don’t have superpowers because of the red sun the moon orbits, and Roulette has moved on from underground fight clubs to interstellar slavery.

Thanks to some non-superpowered bravery — especially on Mon-El’s part, since he wasn’t totally sold on being a selfless superhero until now, the pair are able to escape with all the human prisoners, evading the Dominators who run the joint. Except, while making their final escape, Mon-El faces off with an alien who has him dead to rights. The Dominator, however, intervenes, telling the gunman that he cannot harm this one, and even giving Mon-El a bow — almost as if he’s some sort of royalty.

We get even more of an idea that Mon-El is an important, wanted man when two hooded figures arrive on Slaver’s Moon asking for him, killing the man they were talking to after learning their quarry is on Earth.

Mon-El is much more important than he’s letting on, clearly. He didn’t even seem that surprised when the Dominator bowed to him. Fans had already begun to speculate that Mon-El is the Prince of Daxam, even though according to his backstory, he was just a palace guard, and the actual prince opted to save him rather than evacuate safely himself.

As Redditor zuhayr378 pointed out well before this episode, it did seem like Mon-El was about to confess to something like this back in the seventh episode of the season, when it seemed like he was about to die:

Mon-El: You want to know why I’m the only one who survived Daxam? If I die in this cell maybe I deserve to …

Kara: You don’t deserve to die, you deserve to survive! That prince on Daxam sacrificed himself because he saw that you were worth it.”

Mon-El: About Daxam, there’s something I need to tell you—

At that point, he’s interrupted, and we don’t hear what he was going to say. Based on tonight’s episode, it sure seems like he was going to say that he’s the real prince — and now we know for sure that some nasty people are out looking for him.