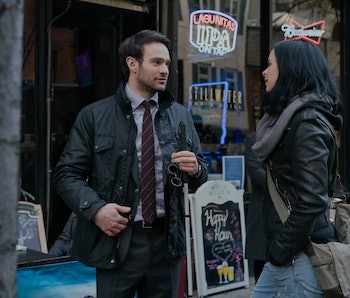 Marvel and Netflix’s Defenders series has just released glossy new photos of the cast via Getty, and every one of them sure looks close and cuddly.

The Defenders, Netflix’s own version of Marvel’s Avengers, will bring together the heroes who starred in its various street-level superhero shows like Daredevil, Jessica Jones, Luke Cage, and 2017’s Iron Fist. While the series won’t premiere until after Iron Fist debuts, completing the Defenders roster, the team-up show is currently filming. While there are no plot details yet, these photos show the cast goofing off, having a good time, and most importantly, flirting.

Images of the cast show off established couples like Luke Cage and Claire Temple cuddling, while also teasing some flirtatious moments between previously unpaired characters like Daredevil’s Matt Murdock and Jessica Jones. Meanwhile, all sorts of other characters like Jones’s best friend Patsy Walker also make appearances. You can see these images over at Getty here.

The Defenders has the benefit of arriving with a pre-existing shipping history. Jessica Jones and Luke Cage were at one time in a relationship before Cage discovered that Jones killed his wife. Likewise, Claire Temple and Matt Murdock had a tense chemistry before ultimately being passed over for a love triangle between Matt, his ninja girlfriend Elektra, and journalist Karen Page.

It appears now that the Jessica Jones/Matt Murdock pairing and Luke Cage/Claire Temple relationship will form the basis of some plot in The Defenders. Although whether or not Jessica Jones and Luke Cage confront each other about the whole situation is to be determined.

The Defenders premieres on Netflix sometime in 2017.