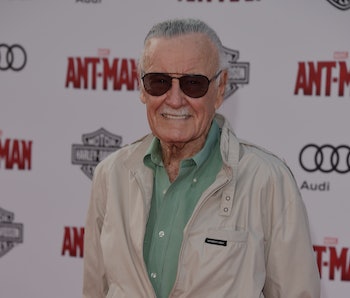 Excelsior! — even on Netflix. A batch of new on-set pictures from Marvel’s The Defenders has revealed that, once again, the venerable Stan Lee will make a cameo appearance.

In one photo, all of which were provided by Getty Images, Jessica Jones (Krysten Ritter) can be seen enjoying a rare moment of fun in front of a giant poster for the New York City Police Department. Smiling down at her, in full police uniform, is Stan Lee’s instantly recognizable face. In the Marvel’s Netflix shows, Lee is apparently a high-ranking cop. The poster even has a cheeky tagline: “Not all heroes wear capes.”

Lee’s Defenders cameo is a continuation of his appearances as a cop on NYPD posters seen in Daredevil, Jessica Jones, and Luke Cage, all of them Marvel productions for the VOD service. But The Defenders seems like it will offer the clearest look yet on an oversized poster, which makes it Lee’s literally biggest appearance in this corner of the Marvel Cinematic Universe.

Lee, of course, has made a cameo in almost every Marvel production so far, including non-Marvel Studios films like Fantastic Four, Deadpool, and Sam Raimi’s Spider-Man trilogy. Lee hasn’t been in every movie, though; he missed 2013’s The Wolverine due to filming in Australia, which Lee couldn’t make the trip for. Lee has also been lightening up his busy convention touring schedule as he advances in age.

Who knows — maybe Officer Stan Lee will make an appearance in the flesh? We’ll find out when Marvel’s The Defenders premieres on Netflix later this year.