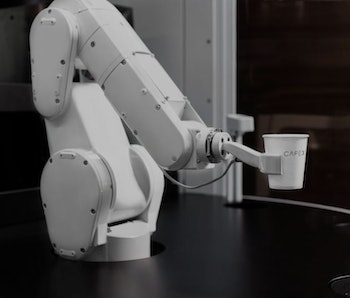 Until this week, it was just a cute Hong Kong robot story — but now, the robotic cafe has arrived in America.

Debuting Monday at the Metreon shopping center in downtown San Francisco, the Cafe X robot barista provides coffee shop-quality java at a speed and consistency only full automation can provide. This isn’t quite like the new touchscreen kiosk at your local McDonald’s, which still relays your order to a team of humans; this is complete automation of customer service.

Once there’s a robot to deliver the beans to the hopper, the kiosk won’t require any human intervention.

“The art part of coffee is the expertise in creating the beverage, not how well you can repeatedly do it,” Cafe X founder Henry Hu told the Wall Street Journal. “That is repetition a robot can do.”

To an extent, the CafeX brand robotic cafe is just a flashier version of the traditional coffee vending machine; they’ve long been able to grind beans, take payment, and dispense coffee. The difference its makers hope you notice is that CafeX dispenses coffee you might actually want, in a much more convenient manner. There’s also a cool a Mitsubishi six-axis arm to factor into consideration — one of the problems with traditional coffee machines is that coffee gets bitter and chalky when left on a hot plate for hours, so quick turnover due to a neato gimmick does impact the coffee itself.

CafeX also allows remote ordering through smart devices, meaning it could not only alleviate lines, but let people submit their order before they’ve quite arrived at the kiosk. The drink will be kept behind glass, safe from would-be drink-stealers, and dispensed immediately when the customer uses their device to signal that they’ve arrived, hopefully grabbing it without having to break their stride.

This has all, of course, provoked fears of automation-based unemployment — and rightly so. Forbes told the world’s baristas to look out, which will be particularly resonant given that coffee shop shift-work seems to be about the only real growth industry Millennials have left. It can serve about 120 black coffees an hour, or about one every 30 seconds — at least on par with a human employee assigned to the same work during a busy shift.

CafeX says that this “won’t replace baristas or the coffee shop experience that so many people have come to love,” which is the roundabout way of claiming that this isn’t the face of the impending jobocalypse. If it’s successful enough, however, it very well might be.

There are, of course, social advantages to interacting with a human barista, every morning. But at international coffee chains that already offer a fairly cookie-cutter experience through an ever-changing cast of recent high-schoolers, that advantage might not actually be that common.

Nobody has a good plan for dealing with the oncoming wave of automation-driven unemployment (basic income?) many futurists predict. Still, moves that threaten widespread, low-income jobs like those in the service industry could have the most immediate adverse effect on the country as a whole.

Right now, fancier drinks are still beyond the robotic cafe, but surely that will change soon enough. Before you know it, the simple act of handing a coffee from one human being to another could become the threshold of the “artisinal” coffee experience.

If you find yourself in Hong Kong, the original Cafe X robo-barista is still serving coffee there, too. The Wall Street Journal reports that an “eight-ounce robot latte runs $2.95, 40 cents less than a short latte at the Starbucks around the corner.”

And for now, humans are still needed: “Cafe X has a human ‘concierge’ on hand to make sure the system is running and help customers who might be confused,” reports WSJ.