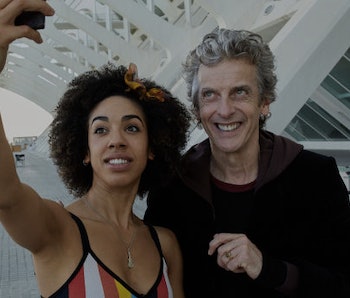 After a brutal mind wipe and a string of recent conflicts verging on the depressingly dark, the Doctor might get some of his groove back. And it’s all thanks to the slate of writers shaping the adventures of Season 10 of Doctor Who.

Doctor Who Season 10’s writer lineup has officially been completed, resulting in a possible look into the overall mood of the upcoming season. Showrunner Steven Moffat will write the season’s opener, as well as the final two episodes. He’ll also be working with writer Peter Harness on Episodes 6 and 7.

Episode 3 will be written by Sarah Dollard, the mind behind Season 9’s “Face the Raven.” And Episode 9, “The Eaters of Light,” will be taken on by Rona Munro, a Doctor Who veteran who wrote the fantastical final adventure of the 7th Doctor. The presence of two women on the writing staff for Season 10 ties it for the most inclusive staff in Who history.

Season 9 also had two women aboard, Dollard being one of them. Not that a writing staff with two women and all white people counts as “inclusive,” but it’s better than usual.

Something this group of writers does have is experience in lighthearted humor, an element that’s been sorely missing in Moffat’s era lately. Several of the writers for Season 10 worked on BBC Three’s Being Human, a supernatural TV series that, while dark, also had incredibly bright spots and a lot of warmth. This is the kind of heart Who seems to have left behind. Dollard also worked briefly on Merlin and Primeval, two beloved cult shows with quirky jokes and smile-inducing moments aplenty.

So while there aren’t yet any plot synopses of these episodes yet, maybe Doctor Who fans can look forward to something a little more fun when Who returns in April.