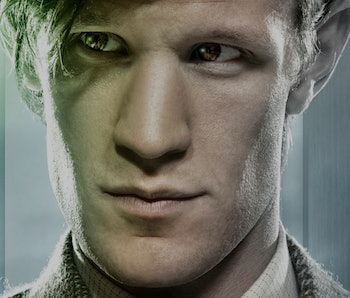 Despite constant time travel, the 2018 stories of Doctor Who could be less “timey-whimey” and more straightforward. With the permanent departure of Steven Moffat, the king of Doctor Who paradoxes, the Doctor’s timeline going forward is looking a little more linear.

Speaking to students at Oxford University last week, Steven Moffat made the finality of his Who departure clear saying, “I think as much as I hate to concede it … once I’m done, I’m done.” And Steven Moffat’s departure could mark the end of an era for the Who universe, because, for better or for worse, the time paradox plot device has been the showrunner’s unique specialty.

From “The Pandorica Opens” and “The Big Bang” to “Angels Take Manhattan” and even “Before the Flood,” Moffat’s time on Doctor Who has been riddled with mind-boggling paradoxes that sometimes seemed to many fans to be his crutch. “In a show where the main character is a time traveler, he is changing time,” was one of the writer’s responses to fan criticisms of paradox plots.

Moffat’s plot twists and explain-aways were often controversial despite the nature of Doctor Who, it being a show about time travel and all. There are bound to be complications.

Noted paradoxes from Moffat’s tenure include the Pandorica debate: How, exactly, did the Doctor manage to get out, and where did the sonic screwdriver come from? Amy and Rory’s deaths represent another: What do you mean the Doctor can never see them again and they have to die? And then there’s the Doctor’s Beethoven bootstrap paradox from “Before the Flood.” There’s also the bit about River being Amy and Rory’s child … which is sometimes a bit of a paradox and sometimes pure writer’s convenience.

This isn’t to say that paradoxes didn’t exist in Doctor Who before Steven Moffat was showrunner. His script for “Blink” still holds up as one of the best paradox stories in all Who history. The 9th Doctor’s “Father’s Day” was built entirely around a paradox, too, as was the classic 4th Doctor serial “City of Death.”

Steven Moffat’s successor — Chris Chibnall — has of course, written for Doctor Who before, too. And, even though Amy and Rory saw their future selves waving in his script for “The Hungry Earth,” none of Chibnall’s stories, like “Dinosaurs on a Spaceship,” totally relied on a time paradox to explain the basics of the story.

Time paradoxes are fun. Everybody loves them, but if Steven Moffat’s influence is truly gone from Doctor Who, then wibbly-wobbly plot devices might become a rare story treat rather than the show’s narrative default setting.