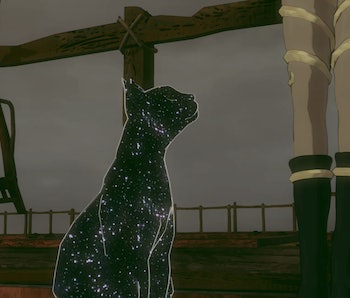 Over the past few weeks, I’ve been slowly working my way through Gravity Rush 2, jumping between floating landscapes and wandering around mining sites. Every location I’ve explored has been a real treat thanks to the game’s excellent level design and wild gravity-based traversal system. But no matter how much Gravity Rush 2 manages to pull me into its world, I can’t shake the feeling that I’m missing a huge part of it because of the poor introduction Gravity Rush 2 provides for players who haven’t touched the original.

As a newcomer to the Gravity Rush universe myself, I was surprised to see that Gravity Rush 2 didn’t give players an option to view a short plot synopsis of the original. Since each of the key characters at the center of Gravity Rush 2 is introduced to players in the first game, the latest installment automatically assumes players will understand everyone’s backstory and how each directly ties into the point where Gravity Rush 2 begins. That’s just frustrating for players who are jumping into the series for the first time.

During the opening hours of Gravity Rush 2, players are introduced to Kat (the gravity queen and player character), her trusty friend Syd (who’s apparently great with tinkering), and the mysterious, adorable cat Dusty (who gives Kat the abilities which allow her to manipulate gravity). Picking up where the original game left off, both Kat and Syd are working to pay off their personal debt to the leader of the Banga Settlement, Lisa, after she took them in. The two mine for ore to do so, but things start to get a little stranger and Kat comes across Dusty once again. Now with her gravity manipulation powers back, she seeks to aid the settlement in any way possible, and that’s where the main story of Gravity Rush 2 takes off.

Each of the core characters in Gravity Rush 2 is immediately lovable regardless of your experience with the original thanks to personality quirks and the game’s custom language. Kat herself is a relatively driven girl who does most of the heavy lifting for the group while sarcastically giving everyone a little hell, while Syd and his clumsy inventions are always trying to gain a little bit of fame during their adventures. Dusty is just as admirable as well, floating around and accepting as many pats on the head as possible in-between Kat’s gravity-shifting antics.

While they’re all great, there’s not much information regarding how Kat, Syd, or Dusty came to reach their present state at the beginning of Gravity Rush 2 within the game. Naturally, you can get a few details in the short anime available on PlayStation’s YouTube — though it may leave you even more confused.

The more Gravity Rush 2 threw at me, the more disconnected I felt from the game. Even after completing a handful of story missions, side quests, and reading speech bubbles, I didn’t understand why I was killing the Nevi, why Kat was so focused on returning to Hekseville, or where Kat fit into the world. It feels like Gravity Rush 2 is keeping a huge chunk of the puzzle from me.

What’s frustrating is that this initial disconnect is one of the only issues of any note that Gravity Rush 2 has. Exploring gorgeous locations while listening to jaw-dropping hits from the live soundtrack is a great experience. Practicing gravity-based combat skills and unlocking more combos to take on some well-developed boss fights never gets old. But even after watching the anime tie-in a few times and looking through the original game’s plot summary, I just can’t seem to get past the initial void that prevents me from falling in love with the characters Gravity Rush 2 so desperately wants me to as a player.