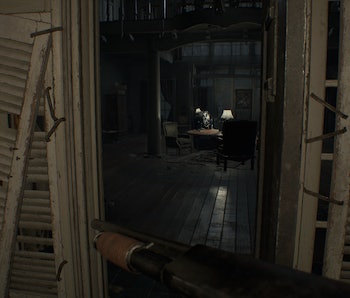 Surviving long enough to escape the Baker property unscathed is a challenging task to complete during your first playthrough of Resident Evil 7. Even with the right equipment at your disposal, enemies can tear you apart in a matter of seconds provided you don’t plan your movement and have an escape route prepared. No matter the situation, though, you must be ready to defend yourself, and that’s where the game’s selection of different weapons comes into play. While playing through the first few hours of Resident Evil 7, you’ll come across a few basic weapons like the pocket knife and handgun, which you can use to keep enemies at bay as you search for a way to get away. If you really want to put them down quickly, you’ll want to find the pump-action shotgun and send them flying backward against a wall.

Arguably the best weapon available in Resident Evil 7, the pump-action shotgun is a reliable gun with enough stopping power to send just about any enemy tumbling to the ground with a few shots. Unlike the handgun or pocket knife, the shotgun can drop most normal enemies within 1-3 shots provided you aim for the head, which is a great return on investment when it comes to ammunition.

Like every other firearm in the game, the only issue with the shotgun is going to be distance. Keep in mind the moment of downtime between each shot as you pump the weapon and its very long reload time since you must manually click each shell into the chamber. Because it only holds four shells at any given time, you can’t afford to miss a shot or be stuck reloading when an enemy or group of enemies is rushing at you. So, if you manage your ammunition carefully and keep it loaded, you’ll remain a force to be reckoned with regardless of the enemy you’re going up against.

What’s great about the pump-action shotgun is that you can get it relatively early, provided you know where to look. Like most other key items in the game, the weapon is locked behind a puzzle which requires you to get a few items before you can solve it. Once you’ve escaped your first encounter with Jack Baker in the Garage, head into the Main Hall and look to your right. You’ll find a statue holding it behind a large iron door. When you grab it, you’ll be locked in the room since the statue is a weighted plate, which means you need a counterweight.

To find a viable counterweight, which, in this case, is a broken hunting shotgun, you’ll need to find the Scorpion Key located below the Main Hall. Head upstairs and explore the available rooms until you reach a bathroom with a filled bathtub. Grab all the items in the room and then drain the tub, revealing a Wooden Statuette. When you leave the room, an old friend will come back. Simply shut him in the bathroom and make a brake for the Main Hall, closing all the doors behind you.

Go downstairs and look for the room with the projector. Here you’ll take the Wooden Statuette and drop it on the pedestal in front of the projector. Simply twist the statuette to resemble the eagle’s shadow missing from the picture on the wall to open a secret passageway.

Head down into the passageway and loop around to find a Safe Room. Go ahead and save here, and then head back out the door to continue further down. In the basement, you’ll come up against a few enemies. Carefully eliminate them with a few headshots until you find a blue gate. Activate it to push it aside, and then look for a mound of flesh in the middle of the room with the Scorpion Key. Grab the key, then head back upstairs to the Main Hall.

Once in the Main Hall, head to the second story of the house where you found the Wooden Statuette. Instead of going straight for the bathroom, head into the rec room and look for a door covered in brass scorpions. Open it up with your new key, and grab the broken shotgun from inside. Now, head back down into the Main Hall and claim your pump-action shotgun, using the broken one as a replacement to keep the door open. Easy, right?

If you’re having a difficult time with combat, this pump-action beauty should certainly help you fight you way through some difficult encounters. Just remember, ammunition is limited, so don’t go spending it all in one place.