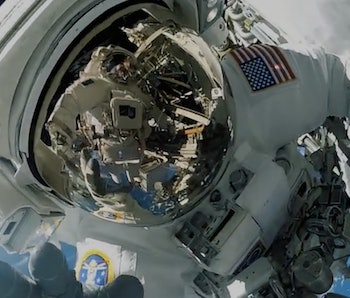 A new video released by the European Space Agency shows French astronaut Thomas Pesquet on a spacewalk with NASA astronaut Shane Kimbrough to complete a battery upgrade on the International Space Station’s power system a few weeks ago. The footage looks absolutely stunning — and petrifying.

For the uninitiated, a spacewalk is when astronauts leave the space vehicle while in space. Russian astronaut Alexei Leonov went on the first spacewalk in 1965, and it was just 10 minutes long. Nowadays, however, astronauts go on spacewalks that usually last five to eight hours to work outside their spacecraft, conduct experiments, and repair or test equipment, wearing safety tethers or jetpacks to stay close to the aircraft.

It’s pretty freaking cool to walk in space, but it’s not a leisurely walk in the park. Astronauts train for hundreds of hours by using virtual reality or swimming and practicing spacewalks underwater, since floating in space is like floating in water. Imagine having to do this for five to eight hours.

In the video, you can see Pesquet and Kimbrough working on the station as it orbits the Earth about 249 miles in altitude, as it zips through space at over 17,000 miles per hour.

The astronauts had a really productive walk. Besides installing batteries, they also retrieved a failed camera, installed a protective cover on a docking port, moved handrails to prepare for future spacewalks, and took pictures of the facilities for ground control. Meanwhile, they had a stunning view of Earth from above.