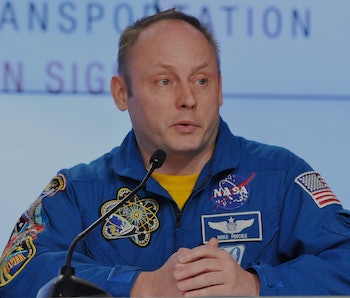 On Friday, NASA crew members aboard the International Space Station (ISS) undertook a spacewalk to attach a new international docking adaptor (IDA) outside the station. These sessions, where astronauts remain attached to the station, are a vital part of life aboard the ISS.

“Spacewalks are a big part of the history of the ISS, made it possible,” said commander Jeff Williams, who on Friday went on his fourth spacewalk, in NASA’s webcast. The construction of the ISS itself involved between 180 and 190 spacewalk sessions.

The walk takes a lot of preparation. Astronauts train for hundreds of hours in the weeks leading up, completing training tasks like underwater simulations of what the repair will be like. On the day, astronauts wake up, put on thermal undergarments and eat a big breakfast. They’re going to be outside the ISS for around six hours, so it’s important to eat enough to keep maintained. In all, getting ready takes about four hours.

Once you’re out there, it can be a lonely experience. “They’re on the edge of the abyss,” said Mike Fincke, a NASA astronaut that’s spent more than two days spacewalking over nine sessions, in NASA’s webcast. Only the whirr of the suit’s fans and occasional radio chatter keep you company.

Inside the suit, there are approximately four pounds per square inch of oxygen. That’s only between a third to a quarter of the earth’s atmosphere, which makes it very dry inside. Astronauts have to remember to maintain hydration.

The amount of work the crew gets done will impact the next spacewalk. They may do more than expected, in which case there’ll be less to do for the next walk, or some incomplete tasks may have to carry over. It may take a long time and feel lonely, but the work done in these spacewalks is a key part of ISS history.