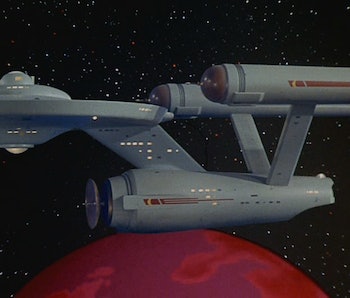 In the original Star Trek, the Starship USS Enterprise almost exclusively orbited planets from right to left, seemingly so that it could favor its good side. And that’s because in reality, the Enterprise only had one good side. The other side of the original 11-foot shooting model was totally naked.

Speaking to the Washington Post, Margaret Weitekamp, a curator in the Space History Department at the Smithsonian National Air and Space Museum, explained there are “literally two sides” to the original Enterprise shooting model: “One is the fully painted, fully decorated side of the model that faced the camera, and the other side was never fully decorated because the camera would never see it.” This confirms what longtime Star Trek scenic artist Michael Okuda told Inverse in December 2016, saying that “only one side of that model was painted.”

The 1960s Enterprise model as been part of the Smithsonian since 1974, but was given a full restoration in August of 2016. The side of the Enterprise seen in nearly every single episode of the original series was technically its starboard side, in nautical terms.

The port side of the ship was glimpsed briefly in the 1967 episode “Mirror, Mirror,” in which the negative was flipped to give the appearance of the Imperial USS Enterprise from the evil universe being somewhat different from its “regular” counterpart.

In the digitally remastered versions of the original series (which aired from 2006-2008) the Enterprise appears from multiple angles, not just its starboard side. Obviously, all other versions of the Enterprise, including the version from Star Trek Beyond also have more than one “good side.” Still, the fact that the special effects crew on the classic show convinced audiences of a whole starship where only half of one was complete, continues to reaffirm just how Star Trek is the epitome of scrappy, can-do science fiction.