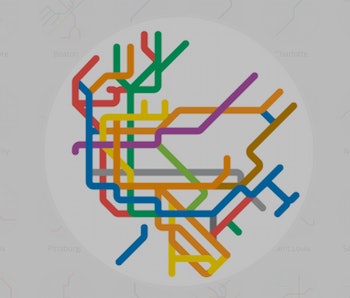 Ever tried to get the subway in Seoul? You might want to think twice after seeing its designs. Arlington designer Peter Dovak has created these miniature depictions of the world’s metro systems, revealing how different countries get to grips with daily commutes.

As commuters in New York get to grips with the new Second Avenue Subway this month, it’s worth taking a step back and realizing just how unique the city’s subway design is compared to the rest of the world. Feeding its lines into Manhattan, the lines clump together on the map’s far left side as the outer boroughs sit on the periphery:

Dovak has created 220 of these miniature maps, and he originally intended them as simple representations for use in an iPhone app. Although they are just 120 pixels wide, their instant recognizability demonstrates how iconic these complex networks are when reduced down to their simplest forms.

It’s safe to say New York is the king of U.S. metro systems. It’s the oldest, longest, busiest, and has the most stations. Compare it to Los Angeles, the second largest city in the country, that has a far simpler metro:

There’s a stark contrast from map to map. Take a look at Helsinki, a system that spans just 13 miles to reach 17 stations:

Now compare it to the incredible length of track that is Tokyo, which spans a staggering 121 miles and reaches 179 stations:

But that’s nothing compared to the Shanghai Metro, the world’s longest system at 365 miles reaching 364 stations:

Why the disparity? There’s a number of factors at play, but one of the most obvious is there’s more people to serve. Shanghai, an important center of economic activity, is also the world’s most populated city, with over 24 million inside the city limits and 34 million in the metro area. Helsinki, on the other hand, is home to less than 700,000 in the city proper. Helsinki is a major northern European city, but when you’ve got fewer people to serve, it doesn’t make much sense to throw money at extra capacity. The same can be said for New York and Los Angeles, or indeed New York and every other U.S. city.