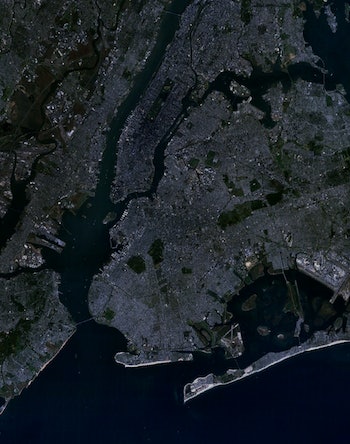 By any measure, young city dwellers are less and less likely to own a car. And New York City officials have spent millions of dollars and thousands of man-hours ensuring that trend works for the recent grads and young professionals that flock to it constantly. NYC bus, rail, and ferry systems are keeping up with a growing population; the roads, well, that’s a different story altogether.

Transportation engineer Samuel Schwartz — better known as “Gridlock Sam” to his readers in the Daily News — has studied transportation in New York City for almost all his life, beginning as a taxi driver in the 1960s, and eventually serving as the Department of Transportation’s Chief Engineer. Today, his eponymous consulting firm helps the city consider what efficiency could look like and his new book, Street Smart: The Rise of Cities and the Fall of Cars, is on the display rack. The semi-autobiographical book follows New York City’s evolution into a public transit powerhouse and kicks dirt onto the grave of urban drivers.

In the book, Schwartz makes an excellent case for why the future of most big metropolitan areas is in optimized public transit systems. He gave Inverse a preview of what’s coming down the tracks for New Yorkers.

What is the current status of transportation infrastructure in New York City?

It’s a mixed bag. The good news is that loads of people are using our ubiquitous subway systems. We have such an extensive network, but it’s a network that’s being stressed with some more frequent delays and breakdowns in the systems. I doubt if anybody would rate it an “A,” but one treasure is that it’s attracted 100 million more visitors in just one year. We’re beginning to see traffic volumes of people we haven’t seen on our subways since the late 1940s. That’s before the big surge in car traffic.

I saw that they were ranked fourth-worst in terms of car congestion, and that’s not a surprise to me, but then again all the cities that made the hit list — San Francisco and Washington D.C., Los Angeles — have also been doing very well as of late, so it’s not such a bad list to be on. And, as I pointed out in my book, congestion isn’t always a bad thing. In fact, at times it makes sense to introduce some congestion measures to slow the traffic down; it actually helps business.

What are the changing conditions that will affect New York City transportation in the next 25 to 50 years?

We’re already seeing more rapid changes than we’ve seen in a very, very long time. One is just land issues — the amount of development within three miles of the central business district. Within the central business district itself, growth has been extraordinary. It’s largely been driven by millennials, who are living in all the communities that have covered the East River — from Williamsburg, to Red Hook, to Long Island City, to Hunters Point, to Astoria. That’s created a whole change in demand. These are people that are looking for active transportation.

Bike and pedestrian paths will reach their limits. Before the East River bridges opened the only way that you could get directly from Queens or Brooklyn into Manhattan were bike or pedestrian paths. Even more rapidly changing have been transportation network companies, like Uber, Lyft, Via, and about 30 others that are all going around the United States and the world, and are looking to get into the New York market. So we’re seeing many many more vehicles on city streets, a lot of people that just use Uber, driving part-time, and that’s adding to congestion. Travel speeds have been going down.

The third big factor is that autonomous vehicles are coming. We probably will have them by 2030; they’ll be fairly common. Before 2030, I believe there will be lanes on highways that will be autonomous vehicle lanes where you take your hand off the steering wheel. You already have devices in cars that can allow you to accelerate and decelerate and cruise in lanes, so we’re not that many years away. Maybe in 2020 or so we might start seeing the first of those lanes!

But what autonomous vehicles will do is both good and bad. For those people who are going to be driving anyhow, it does make it safer. But it also will only contribute to a lifestyle that’s more sedentary and ever-increasing, which I discuss in my book parallels the growth of obesity and cardiovascular diseases, diabetes, stroke and others problems. I worry about a future in which people don’t walk. Their Uber car takes them right to the portal of wherever they’re going, and their office chair comes right out and greets them. Or it’s their home and their recliner comes and greets them. We won’t need legs anymore, like in Wall-E

Your new book discusses how cars are falling out of favor in cities all around the U.S., including NYC. When did you first start noticing that cars in urban communities were on the decline? Was this all of a sudden, or gradual?

People missed when it happened. It didn’t happen with any loud bang, or because planners planned it. Traffic engineers like myself, prognosticators — we all missed it, and it occurred around 2003, 2004, when suddenly vehicle miles traveled per capita went down for 10 consecutive years. It’s only the incredible drop in gasoline prices that’s moving some people towards driving more. As Millennials become the biggest generation — they just surpassed the Baby Boomers — you’re likely to see that overall trend continue.

I do remember in the 1960s, many years back, a brother of mine saying to me that, “Look at where all the poor people — synonymous with minorities, people of color, blacks and Latinos — Look at where they’re living. They have the best transportation. Some day people will figure that out and move back to those areas.” And by that he meant pushing out the people who were in the areas. I went to high school in Fort Greene, and that was a very rough, poor neighborhood, but now it’s been gentrified and yuppified and hipsterfied, and it’s very expensive to live there. There’s been a big turnaround, and a big part of the reason is that transportation is so good.

What we thought was lousy transportation in the 1950s is no longer seen that way. The younger people want to be able to get places. It’s not about the status symbol of your big car with the huge rims, which was my generation. I had a big Chevy Impala with huge rims on it and I loved that car and that was a sign of freedom for me. Now a sign of freedom is having a smart phone and having the apps or Uber, Lyft, Zipcar, or Via. Suddenly you’re more free. You don’t have to lug around several thousand pounds of steel and figure out a place to park it and worry if you’re going to have a couple drinks and fight the traffic on the way home.

So are there any current either specific projects, either that are already on their way or in the planning stages that you’re excited to see, that you think will help in managing the growing transportation needs of the city?

I think that we are going to need some more subways. The 7 train the extension into Hudson Yards is opening next week. The second avenue subway should be opening in about a year and a half.

But I’m pretty excited about streetcars, because they are kind of missing from New York. We had them; everybody had them, and then there was bad management and a successful conspiracy to destroy the streetcar industry, which I cover in my book. General Motors and Firestone Tire and all of the gas companies were convicted and fined $5,000, post-World War II.

There are now self-powered streetcars. There’s a Chinese company called BYD — Build Your Dreams — that has buses that can run from 18 hours on battery charge. We’re seeing the same thing with streetcars. They’re able to run for 10, 12 and soon 18 hours. I’ve built a small system on the island of Aruba, and it’s running beautifully. I’m now looking to do something along the waterfront of Brooklyn and Queens, and I would hope to do something on 42nd St.

Looking more into the distant future, what do you envision New York City’s transportation system will look like? Could we conceive of a New York City that exists as a “post-vehicle” urban community?

I don’t think we’ll ever be quite “post-vehicle.” When I first started working for the traffic department 45 years ago, we had a plan called the “Red Zone: — I talk about that in my book — which would have banned cars for a big chunk of Midtown Manhattan. Since then there’s never been any movement to become totally auto-free.

But are we going to see more auto-free areas — more bike lanes, more plazas popping up. I know Mayor de Blasio has talked about maybe undoing Broadway Plaza, but I doubt very much if that’s going to happen.

What I see is that we will have congestion pricing in New York City. That’s just about a given — the question is when. I have my own plan called “move New York,” which lowers all the tolls everywhere else to make it a bit more palatable to drivers, and to be more fair. So we’re definitely going to have congestion pricing and a revenue stream that will provide for good transit and transportation.

The automobile will still be there. Will it be an automobile that’s driven by a human being or a robotic kind of automobile? We’ll see. Will the automobiles get smaller? The Twizy in Europe has already sold about 15 or 16 thousand of these. Not a big number yet, but it’s like a golf cart that will make for urban driving. We’re going to see some smaller vehicles and get away from these mammoth SUVs. I think that will take a while to make people comfortable, but once we have all sorts of protective technologies, people may forego driving a tank into the heart of midtown Manhattan because the Twizy or whatever will be much safer, and the probability of a crash is going to go down close to zero.

There are always different paths we can take. We can be really dumb as a country — and we have been dumb as a country. We don’t maintain our public works, our infrastructure the way we should. So the real risk is that we have all these young people that are moving back to cities like New York and Boston and San Francisco and Cleveland and just about every city is beginning to see a rebirth, and forget we have to take care of the very basic infrastructure or we’re going to lose all the advantages we get from that.

We also have to cognizant of the fact that just as we had a worry about the auto industry — which took over the street in the 1920s, and then the highway lobbies that got all the infrastructure built on the highways — there’s going to be a battleground again for some of us, to keep us as a motoring public. We’ve seen some of those battles take place in Nashville, in Indianapolis and elsewhere. So we’re not out of the woods. New York’s been on the cutting edge going back to the ‘70s and ‘80s. I think it will remain at the cutting edge. But we could go backwards, and I’ve seen that way too often. So a word of caution.