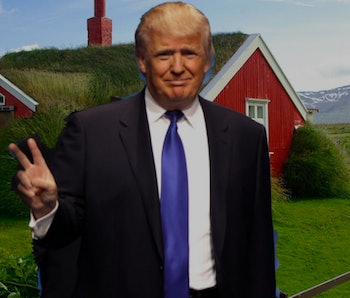 When you think of President Donald Trump’s ancestry, the country you probably think of first is Scotland: His many references to the country — just look at the unnecessarily plaid scarves worn by the Mormon Tabernacle Choir during the inauguration — are thought to be a nod to his immigrant mother’s Scottish ancestry. But a deep dive into his family history shows that his roots lie in a much more walled-off nation: Iceland.

This newly uncovered Trump trivia comes by way of Icelandic genealogist Oddur F. Helgason, who investigated Trump’s ancestry after speculation about his Icelandic roots went viral on Facebook, according to the Iceland Monitor’s report on Tuesday. According to Helgason, president of the genealogy services company ORG, Trump is related to most Icelanders, including the island nation’s current president, Guðni Jóhannesson.

Iceland is known for having some of the most pristine genealogy records in the world; as a nation with a population of only 320,000, it’s good to know who’s related to who. Accordingly, most Icelanders are related to each other, albeit distantly — that’s why Helgason can confidently say that because Trump is related to one Icelander, he’s also related to most of them.

Helgason pored over the records and found that the Jóhannesson and Trump share a common ancestor 25 generations back: King Hakon V, a viking that ruled Norway, Iceland, and parts of Greenland from 1299 to 1319. According to Helgason, Hakon’s legitimate daughter became a Swedish princess whose great-great-great-great granddaughter married King James of Scotland — which eventually led to Donald Trump. Hakon’s illegitimate daughter ended up populating Iceland.

But there still is, allegedly, that a shared genealogical thread that means many Icelanders have a long-lost family member in Trump. And in turn, that correlates to Trump sharing a family tree with some of the most infamous people in the nation’s history — including Bishop Gottskálk the Cruel, who kicked it in Iceland from 1497 to 1520.

According to the book Icelandic Magic by Stephen Flowers, Ph.D., Gottskálk was “the greatest magician of his time” who dabbled in pagan black magic and was super possessive of a book of magic. Flowers writes:

The bishop would grant to this book to no one after his day, and for this reason he hid the book buried with him and did not teach all of his magical knowledge to anyone. Therefore, he was harmful to everyone by way of his speech so that he could confuse the memories and minds of men to get them do to things for which he could blame them.

Confusing the minds of men in order to get them to do things he could later blame on them if they didn’t work out? Replace that book of black magic with Twitter, and it looks like the apple doesn’t fall too far from the tree. Icelanders curious — or fearful — about their shared lineage are advised by Helgason to “look him up to see how you are related to Trump.”

More like this
Science
12 hours ago
This nuclear-powered X-ray “flashlight” may help scientists probe the Moon for water
By Andy Tomaswick and Universe Today
Science
11 hours ago
Clean energy farms may endanger birds and bats — but the remains can reveal a solution
By Emma Foehringer Merchant and Undark
Science
9 hours ago
Does the Doomsday Clock actually mean anything? Experts weigh in
By Jon Kelvey
LEARN SOMETHING NEW EVERY DAY.
Share: