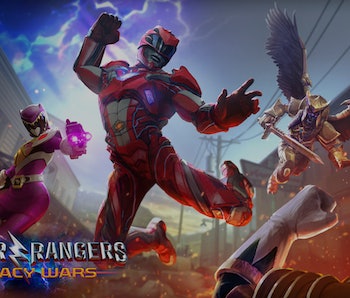 Saban’s Power Rangers, a movie reboot of the classic TV show, is getting a mobile tie-in game, with a twist. Power Rangers: Legacy Wars from San Francisco studio nWay will not only spotlight the new movie Power Rangers but also characters from the TV series, indicating a possible crossover.

Timed to release on Android and iOS devices with the film, little is known about the storyline or even its controls. But screenshots and promo art feature the movie Red Ranger fighting TV versions of the Green Ranger, Goldar, and the Purple Ranger from 2015’s Power Rangers Dino Charge.

The film, presumably, is taking place in a new continuity separate from the TV series that started back in 1993. However, a few odd moments in the trailers indicate the film may not be completely separate. Could a Power Rangers multiverse be on the horizon?

It’s a good time to be a Power Rangers fan. Besides the movie and tie-in game, a new arcade game, Mighty Morphin Power Rangers: Mega Battle, was just released on Xbox One and PlayStation 4. BOOM! Studios is publishing an acclaimed comic book series that boldly reboots the TV show, and it’s currently having a crossover with the Justice League of DC Comics. And of course, Power Rangers Ninja Steel, the newest season of the TV series, just premiered last weekend.

Check out screenshots of Power Rangers: Legacy Wars. In the promotional art below, the new Red Ranger fights the original Green Ranger, the Purple Dino Charge Ranger, and Goldar, looking as he did back in 1995.

Below, an in-game screenshot between the original Green Ranger and the new Red Ranger.

Below, Goldar (the TV one) attacks Angel Grove.

More like this
Gaming
Sep. 28, 2022
You need to watch the trippiest courtroom thriller ever made on Amazon Prime ASAP
By Hayes Madsen
Entertainment
Sep. 15, 2022
Before Werewolf by Night, see another superhero in black and white horror
By Eric Francisco
Gaming
Sep. 20, 2022
Everything you need to know about the latest Fortnite Reboot Rally event
By Joseph Yaden
Related Tags
Share: