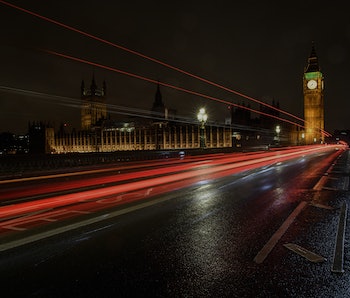 Right now, Los Angeles can’t build roads fast enough. The city’s growth is outpacing highway construction crews. As the gentrification of the city’s core pushes low-income commuters farther out, traffic is condensing, and city planners are scrambling to find better ways to move cars, people, money, and just about everything else more efficiently. Ultimately, that conversation is about more than infrastructure; it’s about the cost and the quality of life in Los Angeles. And there’s really only one way to talk about that in terms of velocity. It’s called “effective speed.”

“We need a more holistic view of the costs of speed,” says University of New South Wales Professor Paul Tranter, an expert on assessing the value of built environments. “Speed often steals our time, steals our money, and steals our health.”

The idea of “effective speed” dates back to the mid-1970s, when Ivan Illich used it to bolster his critiques of institutionalized culture. And arguably, it’s older than that — as old as Benjamin Franklin’s borrowed dictum that “Time is Money,” which is the notion the term seeks to formalize. The idea of measuring speed as time valued in money — translating the marginal cost of travel into a unit — might seem basic, but it didn’t get much traction with planners until the expedited nature of modern urban development made it impossible to ignore. This is, after all, how people get screwed.

If a worker spends one hour total in transit driving to and from work, they might calculate their commute time as a single hour — but if they spent $10 in gas and mechanical wear over that same hour of travel, a more significant portion of their workday was spent supporting that daily commute. If this person makes $10 per hour, then their one-hour commute effectively costs them two hours of time. It doesn’t take long for the math to get untenable for low-wage workers, which presents a clear economic and less clear cultural problem for cities.

And the concept can be pushed further. For instance, cyclists subtract a few cents per day to cover lower health-care costs due to improved cardiovascular health. For one person, that doesn’t make much difference. For a city of millions, a bike lane’s astronomical value can be derived from these nickel-and-dime calculations. When the urban planning discussions orbit around the idea of effective speed, the goals can become clearer: Limit inequality of access and optimize for value over perceived convenience.

He’s laughing because nothing is really that simple. As it turns out, low-income workers have high effective speed commutes, meaning that they take longer at a significant cost. People making less are effectively paying more time to do so. The vicious cycle of income inequality becomes apparent in this formulation: The difference isn’t just dollars, it’s hours lost, which is why effective speed undermines many of the truisms about urban planning. Nothing is built for drivers or cyclists or pedestrians. Those are not groups. The only group is people, and they end up paying vastly different amounts of time for access to the same places. The solution to traffic problems in Los Angeles shouldn’t — seen through this lens — only effect the people driving cars. Infrastructure is a way to give time back to the community writ large.

That’s a big ask, which is why it’s rare to see public officials bringing up the idea.

“The concept has been met with either fear or hostility, either by people who love their cars or even some traffic engineers,” Tranter said, “since it calls into question the whole viability of an urban transport system based on cars, and it also demonstrates how futile it is to try to save time by building faster roads.”

Supporters of an effective speed-based model also believe that by embracing the efficiencies it optimizes for, we will necessarily undo some of the larger cultural implications of sprawl. If large numbers of families step down to owning only a single car, for example, they will need to consume more services closer to home. This could incentivize the re-fragmentation of central, driver-focused shopping districts into the scattered community businesses from whence they came. Effective speeds start to come down.

The inconvenient truth laid bare by effective speed is the extent to which cars make all other forms of transport less viable. Statistically speaking, Americans do not walk. And there’s a reason why: noise, smell, and the feeling of danger caused by cars. Clear some space on the roads, and lower the speed limits on smaller residential roads, and that new, tranquil space will be more viably used by pedestrians and cyclists alike. Costs are diminished, and effective speed once again goes down.

There are some issues that freeways don’t solve.

Imploring officials to invest in public transportation infrastructure is nothing new, however, and while many cities are investing in their own transportation futures, the latest plan for U.S. Federal transportation spending still puts an emphasis squarely on the privately owned and operated automobile. Seen through the lens of effective speed, this is an almost willful misunderstanding of what is good for citizens. Fixing roads may help Americans move faster, but it won’t move the country’s urban centers toward a sustainable future.

More like this
Innovation
Sep. 15, 2022
This jet engine-powered EV revs up a wild 70-year-old idea
By Andrew Moseman
Innovation
15 hours ago
Horrifying: Robots may have just gained a creepy new skill
By Molly Glick
Innovation
5 hours ago
Scientists have created a mechanical womb that can grow life in the lab
By Miriam Fauzia
Related Tags
Share: