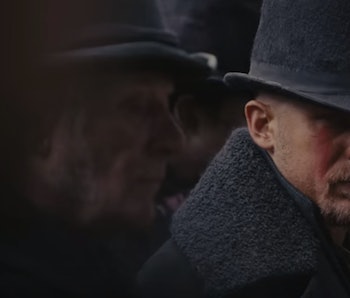 The word on everybody’s mind in FX’s new series Taboo is Nootka. But what’s in a Nootka, or more importantly, who was in Nootka and why do people want Nootka so much? The key location in the show, Nootka Sound, is an actual place you can visit near Vancouver, but don’t expect to go there and see Hardy having weird hallucinations in a loin cloth.

Here’s the difference between the fictionalized Nootka Sound and the real crisis that took place there over 200 years ago.

Everything revolves around Nootka Sound in Taboo, although the show hasn’t actually been there yet. Nootka Sound, at this point, is just a place on a map for characters to point to and yell about when talking to other characters about it. But all that ruckus is warranted.

Nootka is a key location in the show’s depiction of the War of 1812. It’s located between the newly created United States of America and the British empire, which lost control of American colonies a few decades before the show begins. The broader war, as it appears on Taboo, is all about trade and land disputes. Similarly, the Delaney family and the East India Company wrestle for control of Nootka Sound.

Nootka, the tract of land near Vancouver Island, is privately owned by the recently deceased Horace Delaney. It was supposedly given to him in 1874 after he married a member of the Nuu-chah-luuth, the Native American tribe who once called the area home. After Horace’s suspicious death, the land is bequeathed to his son James (Tom Hardy) in the elder Delaney’s will, forcing James to return to England to settle his affairs after spending time in Africa for about a decade.

But, of course, James finds that it won’t be quick and easy when it comes to Nootka.

The land is the fulcrum between the warring factions of the Delaney Nootka Trading Company and the seemingly omnipresent, imperialist East India Company. But why is this insignificant setting so sought after? As Thoyt, the Delaney family’s lawyer, tells James: “There are only savages at Nootka.”

We see Thoyt’s blatant racism and raise him some kingly greed. Solomon Coop, Private Secretary to the Sovereign, tells the eventual King George IV, “This piece of land naturally affords the possibility of a direct trade route with China … you will see that the piece of land in question lies along the line of our disputed border with the Americans.”

The hubbub over Nootka Sound on Taboo takes place in 1814, but the original conflict took place 24 years before that. And it wasn’t between the big bad tag team of the British monarchy and the East India Company versus a dour looking Tom Hardy in a perpetually grimy top hat and overcoat. It was a sovereignty dispute between Britain and Spain about who owned the coastal trading gateway to China.

The so-called Nootka Crisis revolved around Spain sending expeditions to the area to lay claim to the strategic trading post, and eventually establishing a settlement there called Santa Cruz de Nuca. The Brits didn’t take too kindly to that, and sent warships to show the Spanish whos boss. Both got increasingly angry and called their friends (Britain enlisted Holland for help while Spain got their main dudes France in the mix). But an all out war never arose as a weakened France forced Spain to split their claim over the land in what became known as the Nootka Convention so both could set up shop there.

After the War of 1812, Spain up and gave the U.S. their end of the bargain from the Nootka Convention to settle the pacific northwest. This leading to Britain to get angry again as they are wont to do until the Oregon Treaty of 1846 established solid borders between the U.S. and Canada.

Since then, the Sound hasn’t seen any major international incidents, just a seriously moody TV show with a glowering Tom Hardy skulking around Victorian England.

More like this
Entertainment
5.3.2022 12:00 PM
How the "Mother of Yoda" conquered Hollywood — and why she disappeared
By Falene Nurse
Entertainment
5.13.2022 11:30 AM
You need to watch the most thrilling South Korean time-travel movie on Netflix ASAP
By Nam Cheah
Entertainment
5.12.2022 10:00 AM
How Watchmen uses time travel to explore the sinister cycles of racism
By Chrishaun Baker
Related Tags
Share: