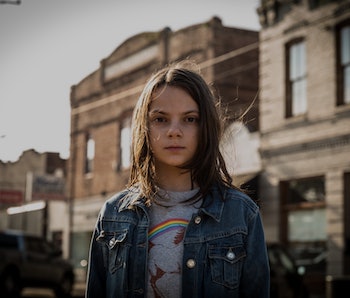 Laura’s looking to be the true hero of the upcoming Logan. X-23 might be a clone of Wolverine, but new photos from the film suggest that she’s anything but a sidekick.

“[Logan is] a darker version of Little Miss Sunshine, with the three of us on the road,” Hugh Jackman (Logan) said to Empire. “Slightly more violence!” The new photos certainly show his comments to be true.

Not only is Professor Xavier looking terrified in his wheelchair as he’s pushed along by a frantic Logan, Laura is ripping into bad guys old-school Wolverine style and doing what looks to be a lot of yelling.

This R-rated addition to the X-Men franchise is taking its role seriously as Jackman looks to don his Wolverine claws for the final time.

The ferocity in Laura’s stance and style — both from these new photos and the official trailers — prove she’ll be a formidable replacement for Logan’s Wolverine (much like in the Marvel comics) if 20th Century Fox is looking to continue its X-Men franchise after Jackman’s departure.

More like this
Entertainment
5.16.2022 4:48 PM
Doctor Strange 2 Easter egg could be a huge X-Men MCU clue
By Alex Welch
Entertainment
5.17.2022 1:00 PM
Frankenstein is returning to the Hellboy universe in a post-apocalypse adventure
By Jeff Spry
Gaming
5.20.2022 2:00 PM
Everything you need to know about the Marvel’s Wolverine game
By Tomas Franzese and Joseph Yaden
Share: