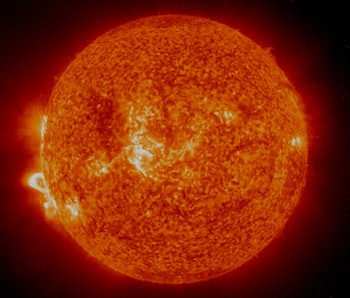 If a solar storm hits us, brace yourself. It will likely disrupt the global economy and possibly lead to months of electricity blackouts, according to new findings published Tuesday.

Space Weather published a paper on the economic costs of electricity failures in the U.S. from coronal mass ejections, or magnetic solar fields released during solar flares and other eruptions.

“There could be considerable disruption to the global economy from extreme space weather if the power grid fails,” study co-author Edward Oughton of the Cambridge Centre for Risk Studies at Cambridge Judge Business School tells Inverse. “Power failure could cascade to disruption in other critical infrastructure systems required for society to function.”

Extreme space weather events are commonplace, but they only seldom affect the planet. The largest solar storm on record, called the Carrington Event, took place in 1859 and caused telegraph equipment to catch fire.

Some experts say a solar storm would lead to a temporary regional blackout that will quickly resume normal operations, but others say the damage will last longer. And pessimists say there would be widespread equipment destruction, with blackouts lasting for months.

It doesn’t just stop at electricity. Extreme space weather would affect production around the world.

“It could be a truly global event,” Oughton says. “…We lack evidence on this currently, hence why there is debate over the length of the outage. There is agreement that we could lose power at the very minimum for a couple of days.”

Extreme space weather is virtually impossible to predict, but the European Space Agency plans to launch a satellite by 2023 that can drastically improve solar storm forecasts and give us early warnings about storms heading for Earth. And the U.S. also has satellites in place to monitor space weather, such as the Deep Space Climate Observatory (DSCOVR) and GOES-R.

In the study’s most extreme scenario, the U.S. would lose over $40 billion a day from blackouts, plus another $7 billion from the international supply chain. Two-thirds of the American populace would suffer the consequences first-hand. According to the paper, on average, the direct economic cost from electricity disruption is only 49 percent of the total macroeconomic cost.

Should we be worried? Probably! A 2012 paper in Space Weather said that there’s a 12 percent chance of a serious solar storm happening in the next decade. Last October, President Barack Obama issued an executive order on protecting the U.S.’s infrastructure from space weather. While the probability of an extreme space weather event is low, a severe solar storm will hit us sooner or later, and it’s only now that federal officials are starting to take notice and create plans for emergency preparedness.

“It is only a matter of time until there is an extreme event that affects Earth, and we really do not know how our advanced technological systems will respond as the last truly global event was over a century ago,” Oughton says.