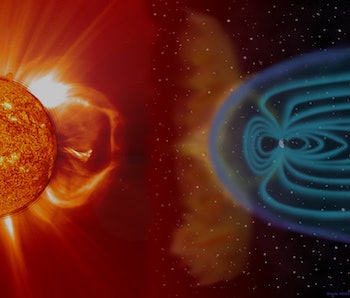 Today was the first day on the job for a 1,200-pound satellite dubbed the Deep Space Climate Observatory’s — DSCOVR for short — that took over as the primary space tech that helps protect our planet from hostile space weather.

The National Oceanic and Atmospheric Administration’s space weather forecasts shifted to being exclusively supported by DSCOVR data instead of using data primarily from the 19-year-old Advanced Composition Explorer.

Why is this such a big deal? Space weather means a lot for the world’s electrical grids, mostly. For the uninitiated, the term refers to the movement and behavior of solar winds; coronal mass ejections from the sun; varying conditions in the magnetosphere and ionosphere; and other strange cosmic bits hurtling through the vacuum of space. It’s basically how high-energy events interface with the electrical and magnetic parts of Earth’s atmosphere. Imagine a really powerful solar storm flaring up. Mere minutes later, if no precautionary measures are taken, you have a scenario where entire swaths of the world could lose power — airplane communications and navigation systems could go dark and automated equipment that operates on a centimeter scale (like tractors or deep-sea drills) would suddenly malfunction.

“Space weather impacts all those kinds of things,” says Douglas A. Biesecker, the chief program scientist for DSCOVR, based at NOAA’s Space Weather Prediction Center in Boulder, Colorado. “These are systems you and I don’t necessarily use on a day-to-day basis,” he tells Inverse, but they are critical for keeping our world spinning (figuratively speaking).

DSCOVR resides in the very distant Lissajous orbit (about 930,000 miles away). It’s not the most well-known spacecraft orbiting the Earth, but it plays a critical role in helping scientists on Earth monitor space weather.

As stated, the biggest concern about solar winds relates to power grids. Space weather could damage critical transformers that move power across large distances at very, very high voltages, and scale that power down to something suitable for our home. If an aberrant space weather event were to knock out those transformers, “it could take years to replace them all,” Biesecker says.

“We consider it critical to provide customers with the best quality forecasts in the mornings.” DSCOVR can see an event from the sun — which produces energetic phenomena traveling at about one to four million miles per hour — and warns us humans to make preparations to protect essential tools, instruments, and infrastructure.

The biggest advantage to DSCOVR over ACE is “the continuity of observations,” he says. “The quality of [ACE’s] data suffers frequently, explains Biesecker. NOAA issues space weather forecast alerts on a scale of 1 to 5. The “noise generated by the ACE data will, by default, add 1 to the scale. An alert under ACE turns out to be nothing as observed by DSCOVR. Its really been remarkable to see how much of a difference that makes to our models,” he says. “The data is unprecedented.”

DSCOVR’s role as the world’s space weather meteorologist is all thanks to its Plasma-Magnetometer (PlasMag) instrument. “PlasMag provides us with data on the solar winds,” says Biesecker. “The magnetic field and its direction, and the solar winds’ speed, density, and temperature.” This is the information that helps inform NOAA what kind of warnings to send out to the public, as well as drive the models that illustrate how the planet is responding to these constant winds.

In addition, Biesecker and other researchers are hoping to use DSCOVR for more ambitious forms of solar wind research. We’re delving so fast into new “atomic- scale physics”, like sampling shockwaves caused by coronal mass ejections “in very high detail,” he says.

Besides that, however, DSCOVR has a couple other tricks up its sleeves. Two of its instruments, operated by NASA, have to do with observing Earth from such a far distance and providing a broader view of the planet and its activity. The Earth Polychromatic Imaging Camera (EPIC) takes photos of the full hemisphere of the sunlit side of Earth. “It’s why Al Gore was so interested in the mission,” says Biesecker. EPIC takes 12 “blue marble” images of the Earth every day. Blue Marble refers to an iconic photo taken during Apollo 17). It’s not just an inspiring view of the little rock we call home, but scientists can use these images to track weather patterns without having to stitch individual images together. A dozen different filters allow researchers to observe trends and movement in dust particles or pollution across the globe.

The last instrument is the National Institute of Standards and Technology Advanced Radiometer (NISTAR), which measures the energy being reflected by the sunlit side of the sun at any given moment. Scientists use this data to track how much radiation enters and exits the Earth’s climate system — an increasingly important data point in the face of climate change.

Overall, DSCOVR is perhaps the most underrated essential space instrument used by NASA and NOAA. It’s a multitasking boss that gives us a heads up when the sun is getting a little violent, and provides us with no shortage of lunar photobombs. It’s precisely the type of thing experts and space-newbies alike can get behind.

More like this
Science
23 hours ago
AI Is Smarter Than Ever – But Some Problems Still Stump Today’s Computers
By The Conversation and Jie Wang
Science
Feb. 1, 2023
7 Years Ago the World Agreed to Slow Down Climate Change — But a New Report Shows an Uneven Future
By Tara Yarlagadda
Science
Feb. 1, 2023
65 Years Ago, America Launched Its Most Pivotal Space Mission Ever
By Jon Kelvey
LEARN SOMETHING NEW EVERY DAY.
Related Tags
Share: