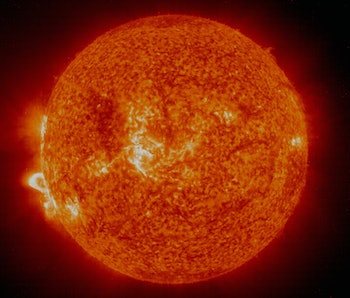 A new report presumably being optioned by Michael Bay demonstrates that Earthlings would have only 12-hours to prepare if a solar storm ever threatened our planet. The Guardian reports on the report from the Space Weather Preparedness Strategy’s fears of “coronal mass ejection.”

Solar activity can produce x-rays, high-energy particles and coronal mass ejections of plasma. Where such activity is directed towards Earth there is the potential to cause wide-ranging impacts. These include power loss, aviation disruption, communication loss, and disturbance to (or loss of) satellite systems.

Relax, we’re not talking about anything that would require Bruce Willis. Even Nic Cage can stay chilling in whichever one of Genghis Khan’s summer palaces he’s currently hanging his cape. The strongest recorded incident of coronal mass ejection happened was the 1859 Carrington event. It was a brilliant lightshow that knocked out telegraphs all over Europe and North America, but humanity remained uncooked.

Inconvenienced, sure, but fine.

More like this
Science
Jan. 17, 2023
Why is January so dark and cold? Here’s the truth about winter’s gloomiest days
By The Conversation and Deanna Hence
Science
10 hours ago
ChatGPT could help students cheat — but it could also revolutionize education
By The Conversation and Sam Illingworth
Science
9 hours ago
The best mystery thriller on Netflix ignores a basic fact about hydrogen energy
By Tara Yarlagadda
LEARN SOMETHING NEW EVERY DAY.
Share: