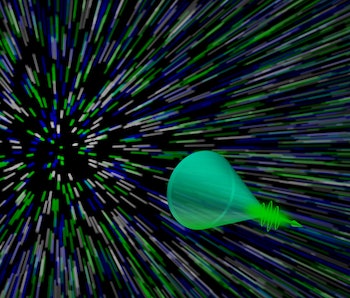 For the first time ever, researchers have invented a camera fast enough to record the scattering of light. The team used this “speed of light” camera to record moving footage of a photonic Mach cone — the pattern in which light particles disperse after an object moving at supersonic speed creates a shockwave. Besides just being wicked as hell, this new technology could allow us to observe neurons as they fire and actually image “live traffic” in the human brain, according to findings published Friday in the journal Science Advances.

“I think our camera is probably too fast,” Dr. Jinyang Liang, an optical engineer and the paper’s first author, tells Inverse. “So if we want to do that, we can modify it to slow it down. But now we have the image modality that’s miles ahead, so if we want to reduce speed we can do that.”

How fast is “too fast,” you ask? In this case, we’re talking about an incredible 100 billion frames per second. The camera’s speed make it an unprecedented tool for recording non-repetitive, single-event physical phenomena. Unlike currently used technologies, which work via “pump-probe approaches” that stitch together a succession of images, one snapshot with this camera is all you need to record all the information.

Liang and his colleagues spend several months developing the experimental technology, which is called “lossless-encoding compressed ultrafast photography” (LLE-CUP). No one has ever witnessed a Mach cone propagating in real time, and applying the camera to different phenomena could lead to breakthroughs in a number of biomedical fields, including helping to image human blood flow and tissue elasticity.

According to Liang, one of the “hottest topics” in his line of work is the BRAIN Initiative, a collaborative research project announced by the White House in 2013 to improve our understanding of brain function. Creating a camera fast enough to capture neurons firing is a critical milestone to allowing us to perhaps one day find treatments or preventions to a slew of neurological disorders.

“We can [now] capture the data without motion-blurring,” Liang said. “Maybe we’ll need to improve the depth resolution going forward, and then the camera has the potential for medical 3D imaging. That would be a quantum leap in those fields.”

More like this
Science
7.2.2022 12:00 PM
Why is my cat scratching furniture? The answer might surprise you
By Tara Yarlagadda
Science
6.27.2022 11:00 AM
Letting your cat go outside could spread “life-threatening” parasites — new research
By Amy Wilson, Scott Wilson and The Conversation
Science
6.26.2022 11:00 PM
The powerhouse of the cell has a more complicated origin than we thought
By Viviane Callier and Knowable Magazine
Related Tags
Share: