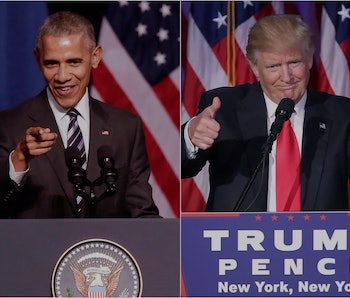 Donald Trump is going to become the U.S. president in just 15 days, and Barack Obama’s Office of Science and Technology Policy (OSTP) issued an exit memo on Thursday to ease the transition. The paper outlines what the administration achieved, how it achieved it, and how the incoming team can help continue that work. It’s been a fruitful eight years on the innovation front, with an increase in research and development spending, a focus on science education, and strong action on climate change.

The work has been good, and naturally the team is hopeful that the incoming administration will pick up where they left off. Here are the 10 action points recommended to Trump.

Invest in Fundamental Research — the team argues that innovation needs to be driven by government research, in areas where the private sector has little incentive to get involved. The report describes research as “the fundamental, curiosity-driven inquiry that is a hallmark of the American research enterprise and a powerful driver of new technology and innovation in the medium and long terms.” Trump needs to make the results available to the public and business innovators.

Recruit, Retain, and Empower Top S&T Talent in the Federal Government — positions like the U.S. Chief Technology Officer are designed to ensure that some of the country’s best minds will assist the government in driving innovation forward. This is an area Trump is likely to have a keen interest in: last month, he met with some of the best tech CEOs in the land to understand how the government can support their businesses, and through Peter Thiel, Trump has a connection to the industry. The question is whether he uses those connections to recruit talent into the government itself.

Identify and Pursue Grand Challenges — this is all about the sort of imagination-capturing goals that the public are likely to support. One example listed is the BRAIN Initiative, aimed at understanding how the human brain works. This one might not work out so well: NASA, core to many of these sort of challenges, is likely to suffer under the future president’s watch, with commentators expecting cuts to Earth Science funding.

Increase Access to High-Quality STEM Education and Drive Innovation for Education — the team suggests a number of ways Trump can help with the goal to get one million extra STEM graduates into the workforce by 2022. This includes private sector collaborations, licensing of educational resources, and investments in infrastructure that will support learning. Infrastructure investment is a big part of Trump’s plan, proposing a $1 trillion plan over the next 10 years. How much of this will benefit STEM education is another issue.

Improve Diversity, Equity, and Inclusion and Mitigate the Impacts of Bias — the report recommends reducing bias in the STEM workforce through federal agencies working internally on bias-mitigation strategies. Another area that will help improve STEM diversity is media representation — to this extent, the team has worked on the “Image of STEM” initiative, which recommended that the entertainment industry debunk myths, include diverse role models, and highlight the breadth of opportunities available in the industry.

Support Innovative Entrepreneurs — newer companies, according to the report, account for 30 percent of all new jobs. It recommends that the new administration ensures that a diverse range of entrepreneurs have access to capital to develop their ideas and continue this growth.

Maximize Economic and Social Return from Federal Government Data and the Results of Federally Funded R&D — Around $140 billion is spent by the federal government on research every year. Part of the plan going forward is to make as much of that research as freely available as possible, to ensure that everyone benefits from it.

Increase Federal Agency Capacity for Innovation — this is all about making sure federal agencies come up with innovative results by using tested methods. These include incentive prizes, crowdsourcing, applying behavioral science, and the above-mentioned Grand Challenges.

Promote Open Government through Transparency, Participation, and Collaboration — the U.S. is a member of the Open Government Partnership, and through that membership it has committed itself to making action plans twice a year on how to improve transparency. One result of these plans is an effort to modernize the Freedom of Information Act processes. The 2016 plan has yet to be fully implemented at agency level, a task for the incoming team if it wants to continue to support open governance.

Continue International S&T Cooperation and Engagement — the U.S. works with a number of countries around the world, including bilateral agreements with Brazil, China, India, Japan, Korea, and Russia. Since 2009, the administration has sent a number of envoys to Muslim-majority countries to learn about opportunities abroad, a program the state department has committed to until 2017. After that date, it’s anyone’s guess as to whether the envoy program will continue.

More like this
Science
9 hours ago
Artemis SLS on the launchpad and more: Understand the world through 7 images
By Robin Bea
Science
10 hours ago
Ancient chicken bones and snail shells date the destruction of a Greek city
By Jennifer Walter
Science
6 hours ago
Wastewater can track viruses like Covid-19 — can it do the same for superbugs?
By Allison Parshall
Share: