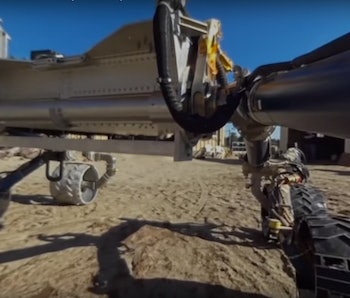 NASA’s Jet Propulsion Laboratory shared an immersive 360-degree video taken from the perspective of one of its prototype rovers as it navigates simulated Martian terrain. It’s thrilling stuff — even though the rover itself is agonizingly slow. However, when you’re driving on the surface of another planet, far out of the reach of any repairs, it’s better to be cautious than to be a speed demon.

The test rover, which NASA calls “Scarecrow” because it lacks an onboard computer “brain” like Curiosity, was driving around the JPL’s “Mars Yard” where they conduct mobility tests. Scarecrow’s driving will help NASA develop and prepare Mars 2020 rovers for their missions on the Red Planet.

The 360-degree video shows the rover move along from multiple angles, including a view from underneath the machine. From that vantage point, you might notice that some of the wheels are full of holes. NASA says that’s on purpose.

“One of the types of testing that has been done with this rover is to learn about how sharp rocks on Mars cause wear and tear to Curiosity’s wheels, by reproducing that process on Earth,” NASA explained in a comment to the YouTube video. “This information is being used to develop wheels for the next rover that will roll over such rocks with less damage.”

Ride-along with the rover in the full video below.