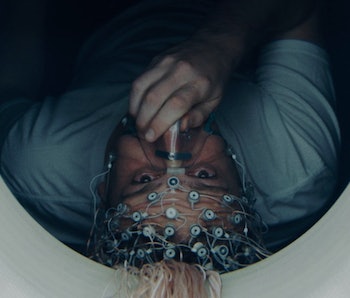 Just in time for its world premiere at this year’s Sundance Film Festival, Netflix has released the trailer The Discovery, a subtle, sci-fi mind-bender about the world in the year after humanity scientifically proves there’s an afterlife.

We could say it got into the festival because Robert Redford is in it, or it might be that it earned its way into the fest because The Discovery looks like an incredible contemplative drama about life after death and everything in between.

It stars Rooney Mara, Jason Segel, Jesse Plemmons, Riley Keough, and Redford, and tracks the relationships of a group of people dealing with the revelation that the afterlife has been proven to be real. Redford plays the scientist who discovered the afterlife; Segel plays his son, Will; and Mara plays Isla, “a woman haunted by a tragic past who Will falls in love with,” according to press materials.

Here’s the official synopsis from Netflix, which bought the movie back in June.

One year after the existence of the afterlife is scientifically verified, millions around the world have ended their own lives in order to ‘get there.’ A man and woman fall in love while coming to terms with their own tragic pasts and the true nature of the afterlife.

The Discovery seems to be largely concerned with the majority of humanity committing suicide, apparently because they think heaven or hell will be better than their current lives.

Some sort of suicide prevention counter shows up a few times in the trailer, complete with the earnest hashtags ready-made by anti-suicide marketers for social media proliferation: #nomoresuicides, #discoverlife. In The Discovery, suicide is such a far different social problem than it is today; it’s an epidemic.

The only line of dialogue in this teaser is a chilling one, uttered by Segel’s character in resignation: “People are going to just keep killing themselves.”

It seems like The OA … only better. Hopefully, The Discovery uses its intriguing premise as a springboard for a character study, because the trailer doesn’t give much of anything away. Bonus points for the trailer including a classic song (“Only the Lonely” by Roy Orbison and Joe Melson) slowed down and made sadder, which every trailer seems to be doing these days.

The Discovery is directed by Charlie McDowell, whose previous work, The One I Love, also includes a very grounded take on a weighty sci-fi premise, involving tumultuous relationships. We can���t explain exactly what that premise is lest we risk spoiling the secrets that movie has to hide, but rest assured, if you ever wanted a movie with a bunch of Duplassess and Mosses then that’s the one. Based on what little images we’ve seen in the trailer for The Discovery, McDowell’s upcoming film seems to continue the themes he explored in The One I Love.

“To describe the story as original doesn’t begin to capture the world that Charlie has created that will envelop you,” said Netflix Chief Content Officer Ted Sarandos after Netflix bought it last year. “Our global viewers are going to love this film.”

The Discovery arrives on Netflix on March 31.