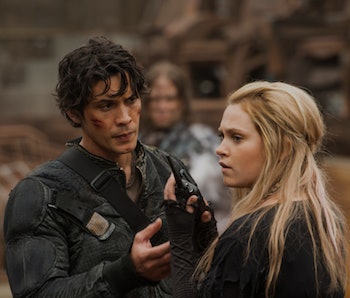 Season 4 of The 100 might be presenting the end of the world, but it will also feature a lot of Bellarke — the internet’s term for the power not-quite couple of Clarke and Bellamy.

Going into the new season of The 100, the delinquents and Grounders face the biggest threat yet: an environmental apocalypse. In previously seasons, the primary threat was each other. The Sky People and Grounders briefly united against the common enemy of Mount Weather in Season 2, but that alliance was short-lived. Season 3 even saw Clarke and Bellamy — whose odd-couple friendship comprises the heart of the show — at odds with each other for a time, as each landed on opposite sides of an ideological divide.

But now that the remaining nuclear reactors are melting down and humanity has only six months to live, Season 4 will see Clarke and Bellamy united again in a struggle to survive.

This is a very good thing, as the uneven third season made it clear that these two function best when they work together. As Season 3 showed, on her own, Clarke’s capacity for tough-love ruthlessness can steer her down the wrong path, while Bellamy’s headstrong team-player qualities sour when he’s fighting for the wrong team.

Whether or not fans prefer for their relationship to be romantic or platonic is beside the point; the show is far more compelling when the two balance out each other’s most extreme traits. Which often means exchanging meaningful eye contact as they marching purposefully, probably towards a plan they threw together to save the world.