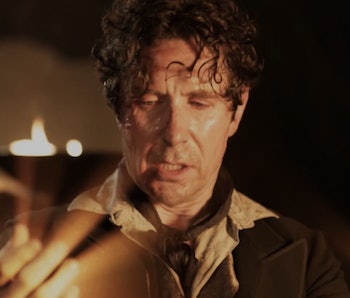 The Doctor investigates the crash of an alien spaceship in London during the Blitz, but it’s not the incarnation of the Time Lord from Doctor Who that you might expect. New adventures of that Doctor who proceeded the War Doctor are now being created by fans.

Fans of the 8th Doctor — portrayed by Paul McGann — have a hard go of it, considering that incarnation of everyone’s favorite time-and space-traveling Time Lord was only featured in one TV movie, one excellent webisode (“The Night of the Doctor”), and more than 70 audio dramas. But, if you know where to look, you can find some non-canon adventures featuring the 8th Doctor’s visage going on short adventures in stop-motion toy form via Doctor Who: Action Figure Adventures.

YouTuber batmanmarch is many things, namely a fan of Classic-era Doctor Who, and reviewer of episodes and merchandise, but perhaps chief among them is his time spent as a prolific producer of these unlicensed Doctor Who stories.

Though batmanmarch has many videos featuring other Doctors in multi-part stories — even Classic-era Doctors — by far the Doctor most frequently featured is the 8th Doctor, who has three entire seasons on the YouTube channel, and is also featured in a number of crossovers.

So, if you’re looking for some fresh 8th Doctor tales, look no further than these stop-motion series featuring Paul McGann’s face in plastic.