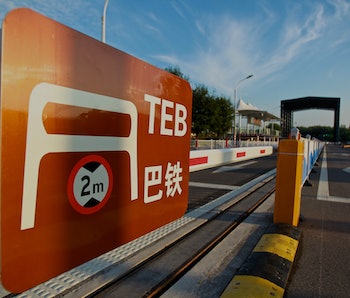 Last August, Qinhuangdao, China, got its first Transit Elevated Bus, or Batie, a Chinese word that combines the words for bus (bashi) and subway (ditie). People cheered as the Transformer-looking vehicle, decked out in a red ribbon, drove down a 330-yard track. It was a big deal at the time, but now, the bus remains in standstill, and so does the ambitious project, thanks to design problems, corruption, and lack of interest.

The Transit Elevated Bus straddles over two lanes and it’s part tunnel and part bus. Above, people ride an elevated bus, looking over the roads. Below, cars can zip through the tunnel. It was supposed to help solve Chinas traffic problems. Out of the 100 most congested cities in the world, 22 of those cities are in China. And Song Youzhou, the bus’s designer, planned for it to be powered by solar energy and electricity.

But after much publicity around the Batie, raised by the company TEB Technology, the bus didn’t get anywhere. Now, it occupies one side of the street, and it’s not in use. The company faces allegations of financial misdeeds, and some executives have gone missing. And the city’s residents are not fans of the bus. Today, it’s mainly a site of curiosity — or an eyesore.

“Useless,” 36-year-old Kong Lingchuan, who works at a grocery store near the bus, told the Los Angeles Times. “It would be better if someone just removed it.”

“It looks like an iron bucket,” said 35-year-old Zhang Dong.

After August, TEB Technology started getting accusations. Chinese state media called it a scam, conning investors. The state-run Global Times alleged that TEB Technology raised much of its money through another company that Bai Zhiming is the chairman of, a financing company called Huaying Kailai. And in 2015, the government blacklisted Huaying Kailai for illegal financial activities, like selling fake investment products.

Song denied these claims, saying that the money Bai invested was his own, and he didnt break any laws. But the company got other questions from media too. How can the bus move around traffic? Can cars get trapped underneath? And analysts warned against driving a heavy vehicle through — or over — China’s traffic. There are some design problems, too. The clearance under the bus is shorter than the height of trucks, and the bus can damage traffic lights and other infrastructure. And at a cost of $4.5 million a bus, acquiring additional funding was doubtful.

But Song told The Paper last month that experts are being sent to Qinhuangdao weekly to inspect the project. Not only that, he said TEB Technology secured another investment from a state-owned company in the energy sector, although he didn’t say which one. But meanwhile, residents and government officials do not know the future of this bus, and whether it’s actually going to be used or removed. City officials can’t reach TEB Technology, and the doors to its Beijing headquarters remain locked.