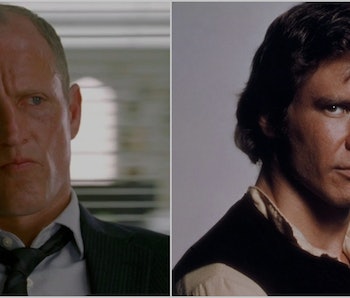 It’s official: Woody Harrelson is going to be in the upcoming standalone Han Solo Star Wars movie. The iconic actor, most recently known for True Detective and the upcoming War for the Planet of the Apes, joins a cast that includes Alden Ehrenreich as Han, Donald Glover as Han’s best frenemy Lando Calrissian, and actress Emilia Clarke in an undisclosed role. While Ehrenreich and Glover seem like spot-on, best choices for their particular roles (at least until we see some actual movie footage), we don’t know who Harrelson will be playing, or whether he’ll use his gruff wildcard persona in the Star Wars universe.

Most of what was previously thought of as Han Solo’s backstory is no longer part of official Star Wars canon now that Disney has jettisoned off the entirety of the vast Expanded Universe as unofficial “Legends.” But the Disney-fied Lucasfilm is willing to cherry-pick characters from both canon cartoons and non-canon sources, as seen by the use of Saw Gerrera in Rogue One and former EU villain Grand Admiral Thrawn’s appearance on Star Wars Rebels.

Harrelson himself recently did a Mashable livestream, and let some supremely vague details about his character slip. “I’m a mentor to Han but I’m also a bit of a criminal,” he said. “I don’t think I should say much more than that because the Force is not allowing me.” It’s very possible that Han Solo co-directors Phil Lord and Chris Miller, and screenwriters Lawrence and Jon Kasdan may have plucked that mentor character from old stories, and if that’s the case, here’s a look at who Harrelson might be playing.

The first and best guess would be a character from a trilogy of EU books written in the 1990s by author A.C. Crispin. These books told Solo’s story, leading into A New Hope. The first novel, The Paradise Snare, features a man named Garris Shrike, a captain who raised Solo as a junior member of the crew of a ship called the Trader’s Luck. Mentor Shrike taught the young Solo to become an Artful Dodger-esque pickpocket and a thief on his home planet of Corellia, but their relationship was nothing but fraught.

Solo tried escaping from the antagonistic Shrike’s influence, and succeeded in his late teens. But he couldn’t escape his thieving past. As a smuggler, Han ends up with a bounty on his head, and Shrike attempts to collect. Needless to say, we know that Solo is the one who shows up in A New Hope, not Shrike.

What makes this character plausible for the Solo standalone movie is that Trooper teaches a young Solo how to fly while he was a cadet at the Imperial Academy. He also eventually goes on to save Chewie’s life while the trio are out to steal a cache of untold riches on a ship called the Queen of Ranroon. Badure is described as being a little rough around the edges in the years between his Academy encounters with Solo and their Lost Legacy adventure, and Harrelson is the kind of guy who can most definitely play rough around the edges.

Another Brian Daley original, this one would tickle the hearts of any Star Wars fan. The Han Solo Adventures were among the first EU books ever written, and Vandangante was the living MacGuffin that drove the plot to Daley’s first Solo novel, Han Solo at Stars’ End. A kind of outlaw scrapper smuggler himself, Doc was captured by an Empire-esque entity known as the Corporate Sector Authority and thrown in a maximum security prison, forcing Han, Chewie, and Doc’s daughter Jessa to help spring him from the clink.

The easiest way to explain Han, Doc, and Jessa’s relationship would be to liken it to Indiana Jones’s relationship between Raiders of the Lost Ark character Marion Ravenwood and her long lost father, Abner. Han and Doc had a kind of father/son dynamic as smuggler acquaintances until Han started moving in on Jessa. This might not match up in a narrative way to what will happen in the Han Solo movie, but Emilia Clarke would also make for a great Jessa.

Karrde might be the wrong age, more of a colleague, and too much of a slick looking dude for Harrelson to play, but casting against his normal, borderline slovenly types might be just what the actor and the movie needs.

Karrde first appeared in Timothy Zahn’s incredibly popular 1991 novel Heir to the Empire as a fellow smuggler, and crossed paths with Han and Lando. He also saved Luke Skywalker’s life, allowing him to escape the clutches of Grand Admiral Thrawn. Obviously, the timeline for this character is seriously out of whack with the Han Solo movie, which is supposed to take place ten years before A New Hope, but that might not be enough to stop Lucasfilm from introducing characters from some of the more beloved EU stories into the main series. Expect the unexpected, perhaps?

A fellow smuggler from Corellia? That sounds like mentor material to us. The steadfast and brash (and heavily bearded) Terrik would be the out-of-left-field choice, because of his inauspicious beginnings. He’s best buds with Star Wars all-star Wedge Antilles, and was such a balls-to-the-wall kind of guy that he actually stole an Imperial Star Destroyer to use it as a smuggling ship.

We might just want to see someone steal and fly a Star Destroyer in one of these movies, which means Terrik isn’t the most realistic choice for Harrelson, but if the screenwriters made him older, he just so happens to have a daughter that Emilia Clarke could play as well.