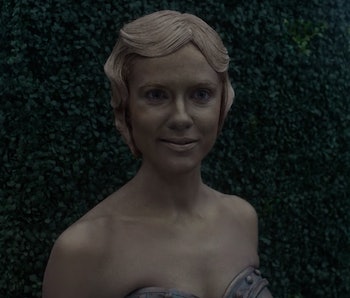 The following contains spoilers for Netflix’s A Series of Unfortunate Events.

Even if you’re a hardcore fan who remembers every detail of Lemony Snicket’s A Series of Unfortunate Events, there is one character in the Netflix adaptation who is confounding — because she’s not in the books at all.

Played by Sara Canning, the intriguing new character Jacquelyn first appears as the incompetent banker Mr. Poe’s secretary in the first two episodes. Later, the show reveals that she is in on the larger conspiracy involving the Baudelaire orphan’s parents. She seems to know their whereabouts, she skulks around the same secret tunnels narrator Lemony Snicket walks through as he tells the story from a vantage point in the future, and yet she seems to be on the side of good.

She appears during the most important moments in the first four episodes — she’s in the crowd at the theater in “The Bad Beginning Part Two,” and in “The Reptile Room Part One,” she’s in a movie within the show called “Zombies in the Snow.” In the fake movie, she imparts secret messages onscreen. Most memorably, she pops up at the end of “The Reptile Room Part Two” disguised as a statue in the center of a maze. Later, still decked out in her statue paint, the audience sees her catch up with Count Olaf and attempt to stop him. He says, “we meet again,” implying that they have a history.

When A Series of Unfortunate Events author Daniel Handler spoke to Inverse, he said about the Netflix series, “The changes are minor but the additions are sizable. The idea was to bring forward certain events and ideas lurking in the background of the books.”

That leaves two distinct possibilities for Jacquelyn. The first is that she is indeed a brand new character. Her addition to the show pulls the central mystery and aura of conspiracy forward, providing a stronger hook for the viewer. The first few books in the series are a “monster of the week” format, as the children bounce around between bad guardians, pursued by Count Olaf. It isn’t until the fifth novel, The Austere Academy, that the children learn that the initials VFD are connected to the answers they seek. The books feel like the author was making up certain elements on the fly, while Jacquelyn’s presence in the show helps to focus and center the narrative.

The second possibility is that she’s not a new character, but a gender-bent version of Jacques Snicket. Aside from the similarities of their names, Jaques — who is the older brother of Lemony Snicket — is a very active member of the secret organization VFD, just like Jacquelyn is. Jacques is primarily an off-page presence in the books, often mentioned by other characters. In the novels, he trails the children, meets Quigley Quagmire (who enters the show at the end of Season 1), and fights on the side of good. The show might have simply decided to make Jacques a woman and give her a stronger onscreen presence.

As a second season is already being written, the fascinating Jacquelyn will doubtlessly appear again — though her fate will likely be quite unfortunate.

A Series of Unfortunate Events is unfortunately streaming on Netflix currently.