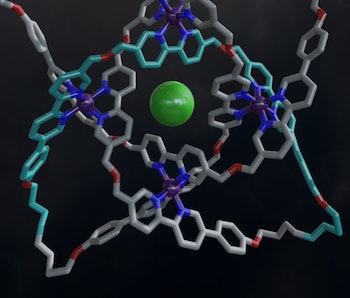 Think about the knots you’ve tied in your life — the over-under knot of a trash bag, the double-knot of your shoelaces, maybe even the stopper knot of a sailing line. Now imagine that knot becoming very, very, very small: so small, in fact, that the closed loops of the knot are the size of 20 millionths of a millimeter.

While we can’t see those little loops with a naked eye, that’s exactly how small a knot that scientists from the University of Manchester recently tied. But the best part about this knot isn’t that it’s super small — it’s the fact that it is the most tightly knotted physical structure ever known.

The purpose of its existence isn’t for the glory of that title (sure, it’s cool) but more for researchers hoping to learn from it how to make, per a statement from the scientists, “a new generation of advanced materials.” Creating different types of molecular knots helps researchers figure out the strength and elasticity of materials, which in turn, helps them figure out how to weave different strands to create new types of materials.

This means that tighter knots can help create lighter and more flexible items like bullet-proof vests and body armor. Polymers — material created from multiple units bonding together — can be woven and knotted in a way that can create a material twice as a strong as steel.

This knot is an eight-crossings molecular knot that exists in a 192-atom closed loop. The hyper-complex woven mixture was created by a technique called “self-assembly.”

“Molecular strands are woven around metal ions, forming crossing points in the right place just like in knitting,” explains researcher David Leigh in a statement, “and the ends of the strands were then fused together by a chemical catalyst to close the loop and form the complete knot.”

Leigh and his team will publish their research on this knot Friday in a paper within the journal Science.

Molecular knots are becoming increasingly researched by scientists. Earlier this year, other University of Manchester researchers discovered that knotting proteins allows them to catalyze different chemical reactions, which in turn allowed the researchers to discover new chemical properties. While our understanding of the world may still be a bit tangled, knots may be the key to the discoveries of the future.