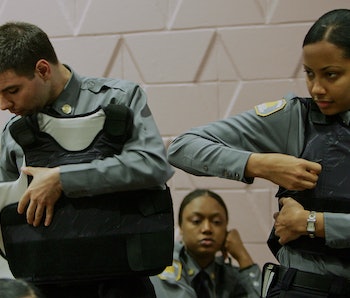 Stopping a bullet isn’t easy: Those tiny but deadly pieces of metal that modern firearms shoot faster than the speed of sound are very good at penetrating things, making entering skin and harming a human look like a joke.

Couple that with the fact that bulletproof vests are in demand, and there’s a real, urgent need to figure out how to stop a bullet. Both civilian and military researchers spend significant amounts of time and money trying to find new ways to stop bullets, and they might have discovered a new substance that’s even better than what’s already out there.

It turns out, the weird, primordial hagfish — also known by the equally disgusting moniker “slime eel” — produces an ultra-light, ultra-strong fiber that could be incorporated into flexible bulletproof fabric. It’s secreted from the fish in a mucus-y goop that most people probably wouldn’t want anywhere near their body, but researchers believe they can replicate the hagfish slime’s complicated filaments in the lab and spin them into a workable fiber.

Bulletproof or “ballistic” vests and clothing have been around in some capacity since the 16th century, but modern design has been relatively stagnant for years; you’ve probably always grown up imagining them being big, black, and blocky. For soft vests, the main component is Kevlar, a composite fiber that’s up to five times stronger than steel and can be woven into flexible designs. Kevlar is a synthetic substance made from petroleum that has a wide range of uses. The problem with synthetic, petroleum-based materials is they’re not easy on the environment. Douglas Fudge, a biologist at the University of Guelph in Canada, thinks the hagfish-slime-fiber could be a model for future protein-based materials that are far more eco-friendly than the current options.

Fudge’s findings were detailed in a PNAS report in late June, though he’s been working with the hagfish for over a decade. For the fish, the slime doubles as a defense mechanism, which might explain their extraordinary strength. Hagfish are able to produce and discharge their slime quickly, secreting a small amount of milky “pre-slime” from glands on their skin when confronted by a predator. This stuff, in turn, immediately combines with seawater to form almost a quart of the fiber-filled slime that can gum up or clog the gills of any fish trying to eat a hag-snack.

This might make one think that the best way to get gallons of the stuff is to just constantly freak hagfish out, but Fudge doesn’t think repeatedly scaring hagfish is the most efficient way to produce the slime. Fudge and his team have made some “very crude” attempts at reproducing the hagfish slime fibers in the lab, but like spider silk, another super-strong organic fiber, it’s difficult to replicate artificially.

“To make fibers, we dissolved purified slime thread proteins in an acidic solution and then allowed the proteins to coagulate into a film on the surface of an electrolyte solution,” Fudge told Inverse. “We then pulled fibers from these films.”

Still, the artificial slime wasn’t quite as strong as the real thing. It snapped under much less stress than genuine threads, but Fudge isn’t giving up quite yet.

On their own, slimy filaments aren’t strong enough to weave into a bulletproof vest. But hagfish threads are promising in the next frontier of bulletproof vests: the fiber remains soft and stretchy even when it’s pulled forcefully. Fudge says the natural threads can stretch to over 200% strain before they break. At 35 percent stretched, the threads lose their elasticity, but recombine with surrounding proteins to form a new structure, which is even stronger.

It’s a little weaker than spider silk, snapping at 700 megaPascals of stress (or 101,526 pound force per square inch), but is still quite strong for a polymer fiber.

This could be big news for a softer bulletproof vest, which relies on a stretchy fabric “catching” or slowing down the bullet and displacing its kinetic force over an area. Essentially, the soft vest radiates the kinetic force of a bullet out over an area, flattening the bullet and stopping it from penetrating. Sure, you’ll probably get a giant bruise and might even break a few bones, but hey, at least you’ll be alive.

More like this
Science
12 hours ago
The Large Hadron Collider restarts next week — here's what it's hunting for
By Rahul Rao
Science
6.26.2022 10:00 AM
In the search for dark matter, an unexpected tool may give scientists hope
By Antonis Antoniou and The Conversation
Innovation
6.29.2022 6:00 PM
Can cars run on water? The science of a TikTok conspiracy theory, explained
By Andrew Moseman
Related Tags
Share: