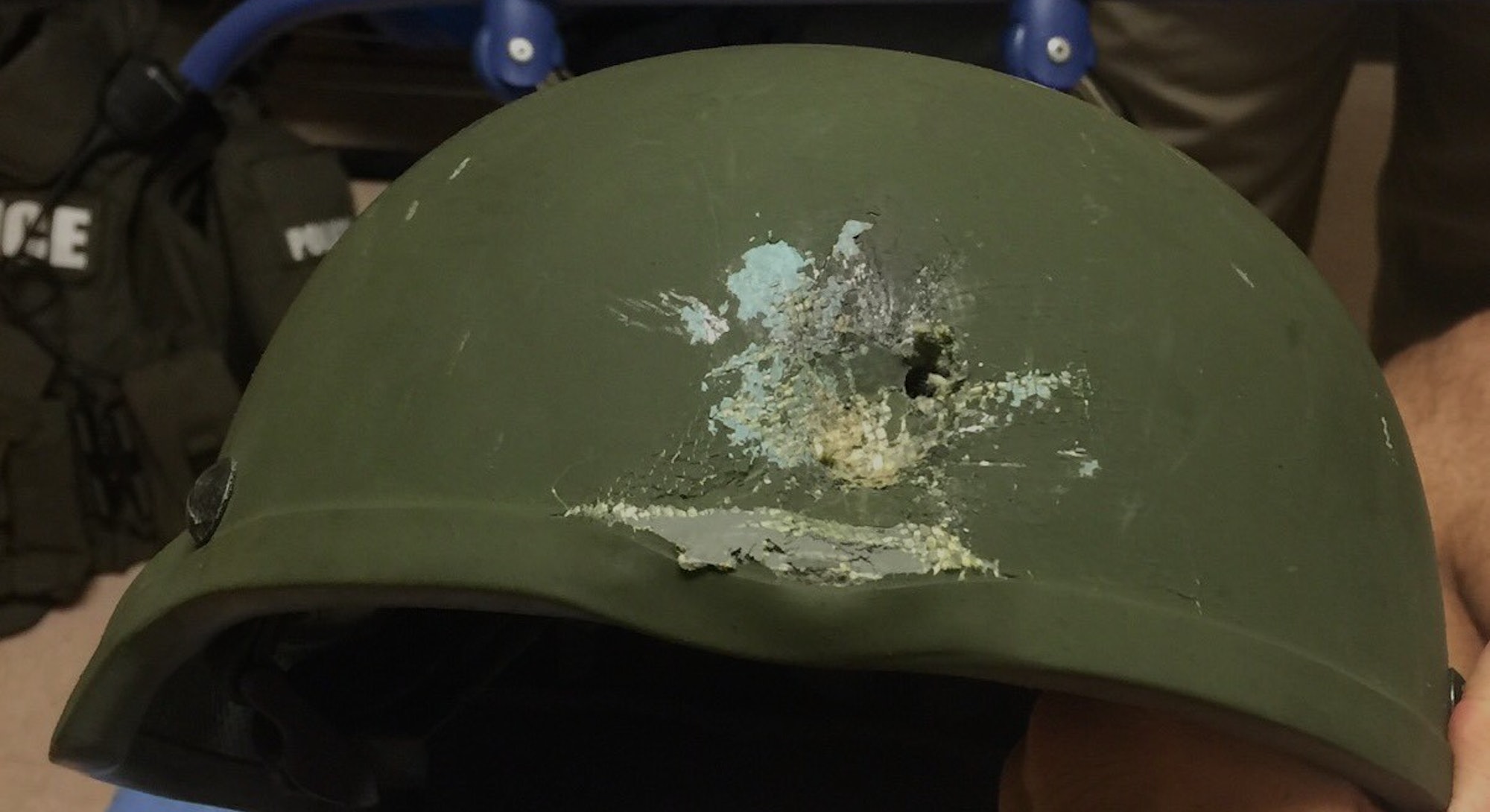 The tragic attack on the Pulse nightclub early Sunday morning in Orlando left 49 victims and the shooter dead. Shortly after 2 a.m., Omar Mateen stormed into the club firing an AR-15 and a shotgun, killing dozens, then taking the remaining party-goers hostage. The standoff ensued until about 5 a.m. when the Orlando Police Department’s SWAT team launched a rescue operation that killed Mateen. The operation was swift and successful, saving at least 30 lives of people trapped in Pulse. Mateen struck only one of the incoming rescuers, but thanks to his kevlar helmet, standard issue for SWAT and military officials around the country, the officer sustained only light injuries.

The role of the Kevlar helmet in averting even greater tragedy on a night full of it would have likely gone unnoticed had the Orlando Police Department posted a picture of the tattered protective gear on its Twitter page Sunday. With everyone in the country desperately searching for something to be thankful for amid the accounts of terror and death, the helmet became a beacon, highlighting the vicious nature of the killings and the bravery of the rescuers. The heavy green helmet shows a clear gash where the bullet struck, suggesting that Kevlar, five times stronger than steel, was able to save this officer’s life.

According to events reconstructed by the Orlando Police, it appears that at some point shortly before the raid, Mateen stepped out of the club and fired several shots at the officers aligned outside of it. Negotiators had been in contact with Mateen, and he had warned that he was carrying explosives that he was planning to use against the more than 30 remaining hostages. The Orlando police then launched the rescue operation when they believed “further loss of life was imminent.”

Rushing in behind stun grenades, the Orlando Police reported “a hail of gunfire” that resulted in the death of Mateen and a single bullet striking the helmet of an Orlando officer. The heroic rescuer remains anonymous, but his story has proven nationally compelling, with hundreds of Twitter users inquiring about his well-being. Orlando Police Chief John Mina was eventually able to confirm that he had spoken to the officer, and he was doing well thanks to his Kevlar helmet:

The national relief over the officer’s safety actually has its roots over 50 years ago in a DuPont chemical laboratory when Stephanie Kwolek synthesized a material at least nine times stronger than anything she had previously ever produced. At first, her colleagues wouldn’t even let her use the spinneret, a machine necessary to turn the liquid material base into a solid compound, out of fear of the mysterious concoction. But after much persuasion, she convinced the skeptical scientist, discovering shortly thereafter Kevlar, the material that soon would change warfare and law enforcement for good.

The stronger-than-steel fiber was supposed to strengthen tires, but it has since gone on to a greater variety of uses in many industries. Kevlar helmets are now standard issue for military personnel and some law enforcement officers in the United States and is credited with having saved thousands of lives. Her discovery has redounded many times over the past 50 years, but rarely as clearly and starkly as in the image of the Orlando officer’s helmet.

In a night of tragedy, it’s important to remember the names of the victims, and solemnly praise the helpers, the rescuers and, of course, Stephanie Kwolek.