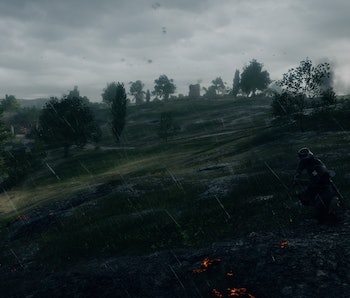 With Battlefield 1, DICE introduced a completely redesigned Battlepack system due to the lack of detailed weapon customization available in the game’s World War I setting. Instead of rewarding players with weapon attachments and camouflage patterns, Battlepacks in Battlefield 1 present players with a unique skin for a specific weapon available in the current Revision. These Revisions change week-to-week too, introducing a new set of weapon skins for players to collect by earning additional Battlepacks in-game or by purchasing them digitally.

There’s also a few specific weapon skins available through pre-ordering Battlefield 1 before release, purchasing the collector’s edition of the game, or completing the various codex entries in the main story. Regardless of where you might find them though, weapons skins have become a highly sought after addition to the Battlefield franchise – one which players are actively saving for and hoping to add to their personal collection.

Here’s some of the most-sought after weapon skins in Battlefield 1 so far.

First available in the second Revision of Battlepacks following Battlefield 1’s launch, the Riot skin is a combination of mesh and camouflage which fits perfectly with one of the most powerful weapons in the entire game, the Model 10-A shotgun.

The Edelweiss skin was one of the first legendary weapon skins Scout players have the opportunity to grab in Battlefield 1. With a dark wooden finish, a set of custom engravings, and a wrapped stock it’s a fantastic addition to the collection of any marksman who enjoys the straight pull bolt for medium range engagements.

The Doughboy skin for the BAR M1918 is one of the flashiest and visually stunning ones DICE has placed in Battlefield 1 so far. Available in one of the first Battlepack Revisions, this engraved gold and black skin was a perfect complement to the unstoppable powerhouse Support players continue to use most often today.

Available in the single player campaign, the Straight Flush skin for the Auto Revolver can be unlocked by collecting all the codex entries throughout the “Friends in High Places” storyline. This gold-plated masterpiece is covered in engravings, with each chamber featuring a suit from a standard deck of cards that add up to one gorgeous skin.

Just like the Edelweiss skin available for the Gewehr M.95, the Archduke skin features a dark wooden finish and wrapped stock for one of the Assault class’s best weapons in close quarters engagements. Complete with engraved barrel and cross carved into the grip, it’s one that many players are waiting to make a return in 2017.

This beauty has to be one of the best-looking revolver skins in Battlefield 1 so far, featuring an engraved barrel and cylinder that perfectly compliment the dark wooden handle this legendary weapon skin is built around. There may be plenty of revolvers in Battlefield 1, but none shine quite like the Assault’s Gasser M1870 sporting the Knight skin.

Built into the fifth Battlepack Revision, the Chancellor remains one of the best-looking Medic-specific weapon skins available in Battlefield 1 to date. With a stock wrapped in green leather, a dark wooden finish, and a set of engravings that perfectly accent the plated barrel — it’s a skin that many players are still hoping to get a second shot at obtaining.

Exclusively available to players who purchased a copy of the Battlefield 1 collector’s edition, the Doughboy is a unique silver-plated M1911 with a pearly white grip worthy of a king. While it may not be the best sidearm in the game, it stands as one of the most iconic ones in history, and that makes it a worthy addition to any Battlefield player’s collection.

Even though it isn’t available through standard Battlepack Revisions, Lawrence of Arabia’s SMLE is a skin that brings out some of the best visuals the team at DICE could muster. Keeping the wooden base of the standard SMLE while augmenting it with gold plating and T.E. Lawrence engravings, this Deluxe Edition skin is one worth picking up if you enjoy the infantry rifles available to the Scout class.

1: The Duke of Aosta (Cei-Rigotti)

No matter where you might find yourself in Battlefield 1, odds are you’ve heard about the Duke of Aosta weapon skin for the Cei-Rigotti Medic rifle. Available in the original Revision during the launch of the game, this rifle features a black wooden frame accented by gold symbols, stars, and engravings which still shine as a symbol for some of the very first Battlefield 1 players today. It’s also one of the rarest weapon skins available through Battlepacks so far, meaning that only a handful of players managed to snag it when it first appeared.