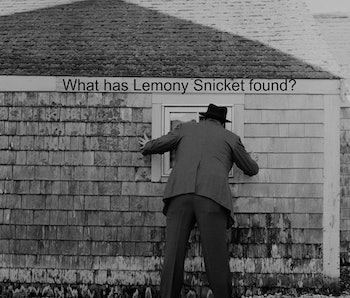 With A Series of Unfortunate Events finding new life on Netflix this Friday, it’s the perfect time to revisit the narrator who made its voice so unique: Lemony Snicket, a narrator as unreliable as he is entrenched within the story he’s telling. He’s played by Patrick Warburton in this incarnation of the series, but he’s more than just a character; he’s a piece of meta-fiction unto himself. Let’s take a step back and look at the creation of a character who’s one of the only unreliable narrators in children’s narratives.

The thirteen installments of the Series of Unfortunate Events books are a dense mix of allegory, tragedy, and complication that never condescend to their young audience, and that’s what makes the series magic. One of the key elements is the person imparting the story itself; Snicket identifies himself as a pseudo-journalist who’s dedicated his life to the pursuit of chronicling the tragic times of the Baudelaire orphans. His voice is intensely present throughout the first several installments (this season of the Netflix series covers the first four books), and he’ll even offer small anecdotes from his own life to put whatever the Baudelaires are going through in context. Readers are regaled with stories of dinner parties he’s attended, a fateful trip to the opera, and tales of long lost love, Beatrice. While not prevalent or affecting the Baudelaires’ narrative in the first several installments, readers are invested in his narrative, and it seems like the two will overlap when the moment is right.

While unique to the genre he’s writing within, there’s a long history of unreliable narrators throughout literature. In the case of the Snicket character, the most likely influence on actual author Daniel Handler is tortured sex criminal Humbert Humbert from Vladimir Nabokov’s Lolita, which Handler has repeatedly cited as the his favorite book. That’s not to say that the two narrators bear any resemblance; while both tortured, Humbert is in love with his 13-year-old stepdaughter, assaults her, and effectively ruins her life, while Snicket, from what we know of him, is depressed due to the complications in his life.

However, the parallels are there: The reader experiences the story through their narrator’s eyes without access to an objective perspective. We’re hearing Humbert’s account of a criminal love affair, and the account of the Baudelaires according to what evidence and testimony Snicket has been able to amass through his research. As a result, we only have their words to go on, and thus have to approach everything said with a degree of skepticism.

As the series continues (spoilers ahead), Snicket becomes a fully fledged critical piece of the Baudelaire puzzle. By the seventh installment of the book series, we learn that not only does Lemony have two siblings, Jacques and Kit, but that both of these siblings become hopelessly entangled in the orphans’ story.

Jacques meets a tragic end after mentoring the Baudelaires and telling them all about the Volunteer Fire Department. The VDF is a secret organization to which the Snickets, the Baudelaire parents, and villain Count Olaf all belonged before a massive schism divided the group and created the conflict that the orphans are consumed by. Then there’s Kit, a critical player in the final books who enlists the Baudelaires to do research for VFD under her guidance; she’s revealed to be the former love interest of Count Olaf in the final installment, though she has fallen in love with someone else. While we never hear of Lemony Snicket encountering the Baudelaires personally, we slowly learn that he’s a member of VFD and knew the deceased Baudelaire parents, Count Olaf, and nearly every other major player in the series. Several years on, the interest in the Snicket character grew so great that an entire spin-off series was launched by the author detailing Lemony’s childhood, his initiation into VFD and early mysteries within the organization.

The relationship actual author Daniel Handler has with his pen name character is equally complicated, and it has become a crucial part of how the author interacts with his audience. Since the series’s conception in 1999, Handler had enabled himself to do live readings and performances as “Lemony Snicket’s representative,” speaking of his pseudonym in the third person and detailing where the real author is in a very Andy Kaufman way. At various times Snicket has been said to be locked in a basement crying, in hiding, at the top of a mountain, and conducting further research on the Baudelaires offsite. In addition Handler has incorporated his love of music into the Snicket persona, frequently playing the accordion as himself at live events and even going so far as to produce a full album based around the series with Stephen Merritt, leader of famous cult band the Magnetic Fields, under the band name the Gothic Archie’s in 2006.

Then, there’s the actors who are playing Snicket in the two interpretations of the series thus far: first Jude Law in the ill-fated 2004 movie that never got a sequel and now Patrick Warburton in the upcoming Netflix series. It’s telling that the narrator is critical enough to telling the Baudelaires’ story that his inclusion into any live series is a necessity. It’s a long way from Handler appearing with his back to the camera in the original author photos, and it’s well deserved.